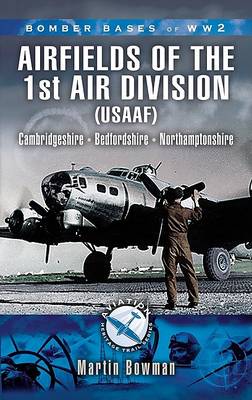 * All the units included flew the legendary B-17 Flying Fortress * Duxford is the home of the only flying example of the B-17 Sally-B in the UK * Looks at the history and personalities associated with each base, what remains today and explores the favourite local wartime haunts where aircrew and ground crew would have gone * It covers museums and places that are relevant and gives general directions on how to get them included. concentrated in a particular area - in this case Cambridgeshire, Bedfordshire and Northamptonshire. Constituted as the lst Bombardment Division on 30 August 1943 the unit was activated at Brampton Grange, Huntingdon on 13 September 1943. It was assigned to the Eighth Air Force and redesignated lst Air Division in December 1944. The division served in combat in the European theater of Operations from September 1943 until April 1945. All squadrons within the division flew the long-distance Boeing B-17 Flying Fortress heavy bomber on raids into occupied Europe and Germany. There were forty-eight squadrons in the division based at Bassingbourn, Ridgewell, Nuthamstead, Podington, Chelveston, Thurleigh, Molesworth, Kimbolten, Grafton Underwood, Polebrook, Deenethorpe and Glatton. Martin Bowman is one of Britain's leading aviation authors and has written many books on World War II aviation history. He lives in Norwich in Norfolk and intimately knows every place of interest within the locality. 60 photos / 15 maps

» Have you read this book? We'd like to know what you think about it - write a review about Bomber Bases of World War 2, Airfields of 1st Air Division (USAAF) book by Martin Bowman and you'll earn 50c in Boomerang Bucks loyalty dollars (you must be a Boomerang Books Account Holder - it's free to sign up and there are great benefits!)