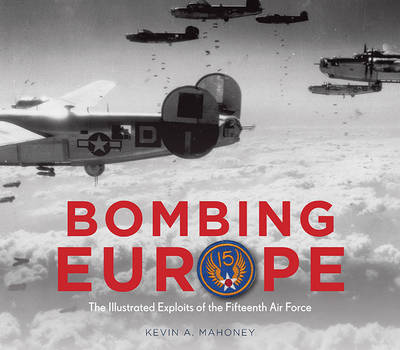 The Illustrated Exploits of the Fifteenth Air Force

The Fifteenth Air Force took the air battle against the Axis powers and Nazi Germany to areas England-based bombers could not reach, contributing significantly to the Allied victory in World War II.

Get the complete story of one of the most ambitious aerial campaigns in history--the bombing of Europe under the Axis powers--illustrated with over 200 compelling photos.

Created in November 1943, the Fifteenth Air Force was the direct descendant of the American Ninth and Twelfth Air Forces that had fought in the Mediterranean since the summer of 1942. Its force included 210 B-17 Flying Fortress and 90 B-24 Liberator bombers escorted by P-38 Lightning, P-47 Thunderbolt, and P-51 Mustang fighters. They took the air battle against the Axis to areas Allied bombers based in England could not reach: southern Germany, Austria, eastern Europe, and the Balkans. Their reach in the Balkans included the oil refineries at Ploesti, Romania, vital to Germany's war effort. Its crews fought the weather, as well as the enemy, by flying over the Alps to reach many of their targets and made a significant contribution to the victory over the Axis powers and Nazi Germany.

Although enemy fighter planes were a major menace during the first nine months of the Fifteenth's air war, ubiquitous antiaircraft fire, called flak, also took a toll on American bombers throughout the campaign. This book tells the story of the brave airmen who bombed the majority of Europe in an effort to win the war.

» Have you read this book? We'd like to know what you think about it - write a review about Bombing Europe book by Kevin A. Mahoney and you'll earn 50c in Boomerang Bucks loyalty dollars (you must be a Boomerang Books Account Holder - it's free to sign up and there are great benefits!)

Kevin A. Mahoney has researched and written books and articles about twentieth-century military history for more than twenty years, including Fifteenth Air Force against the Axis and Formidable Enemies (Presidio Press, 2001), a book about the Korean War. He edited and contributed to In Pursuit of Justice and 1945: The Year of Liberation, published by the US Holocaust Memorial Museum, and wrote the script for the museum's interactive exhibition Witness to History. His work has also appeared in Military Heritage magazine and Military Illustrated.

A Preview for this title is currently not available.
More Books By Kevin A. Mahoney
View All