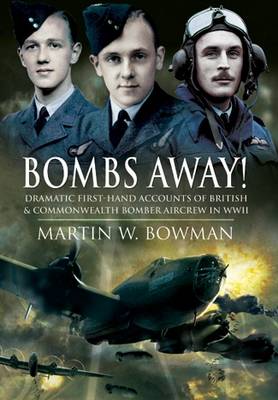 Description - Bombs Away! by Martin Bowman

This is a unique selection of wide ranging experiences of British and Commonwealth Bomber Command aircrew during World War II. Their endearing bravery and fortitude and sometimes their despondency and cynicism, shows through in these stirring, daring, often irreverent, humourous and sometimes sardonic but memorable stories. All reflect the ethos, camaraderie, fear and bravery of the largely ordinary men, most of whom were plucked from the 'civvy street' and thrust into a frightening, bitter conflict which was made even more dangerous by the lethal advance of technology. Death would normally come from an anonymous assassin, either in the black of night, or from behind a cloud or out of the sun, or simply from the Flak gunner on the ground. And, if all of this was not enough, the often unmerciful weather was no respecter of mortality. There was no escaping the all-embracing shock wave that rippled through the bomber squadron after a heavy mauling over the enemy territory. Nothing could be more poignant than the vacuous places at tables in the depleted mess halls, the empty locker of the departed, or the dog pining by the barracks for its missing master. Each man had to deal with tragedy in his own inimitable way. Some hid their feelings better than others did only for the pain to resurface months or even years later. Some who had survived the physical pressures and who completed their tours then succumbed to the mental torture that had eaten away their psyche during the incessant and interminable onslaught day after day, night after night. There was little respite. The valorous men of Bomber Command were, in turn, the Light Brigade, the stop gap, the riposte, the avengers, the undefeated. Always they were expendable. AUTHOR: Martin Bowman plus contributors including Basil Craske, Bruce Saunders, Dudley Heal, Tom Wingham DFC, Bruce Sanders, John Mattey, Bob Davies AFC, Neville S.C. Donmall, Harry Wheeler, Ken Westrope, Malcolm Scott DFC and Dennis J. Gill. ILLUSTRATIONS 60 b/w photographs *

» Have you read this book? We'd like to know what you think about it - write a review about Bombs Away! book by Martin Bowman and you'll earn 50c in Boomerang Bucks loyalty dollars (you must be a Boomerang Books Account Holder - it's free to sign up and there are great benefits!)