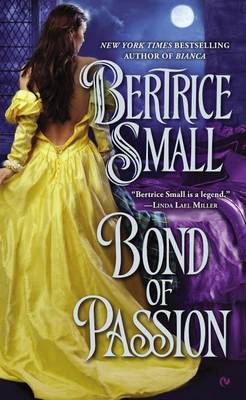 Bertrice Small's breathless Border Chronicles continue as a mysterious nobleman and his bartered bride untangle a plot of illicit seduction and dangerous betrayal....

Called the handsomest man in the borders, Angus Ferguson, Earl of Duin, avoids political intrigues in order to keep his small clan safe. Now, in exchange for a piece of land he has long coveted, he has wed the homely daughter of the laird of Rath, Annabella Baird, whose tame demeanor hides a wildcat. But an invitation to the court of Scotland's Queen Mary will test their marriage as they are tossed about in a storm of deadly royal intrigue.

Mary's unfortunate marriage to her cousin Lord Darnley has driven her into the arms of James Hepburn, the dashing, powerful Earl of Bothwell. When Darnley is murdered in spectacular fashion, and his body barely cold before Mary and Bothwell wed, the queen's adversaries retaliate with a war that divides Scotland and tries the long friendship between the Earl of Duin and James Hepburn--even as it tests the bond of passion between Angus and Annabella in ways they never expected.

Other Editions - Bond of Passion by Bertrice Small » Have you read this book? We'd like to know what you think about it - write a review about Bond of Passion book by Bertrice Small and you'll earn 50c in Boomerang Bucks loyalty dollars (you must be a Boomerang Books Account Holder - it's free to sign up and there are great benefits!)

Bertrice Small was the New York Times bestselling author of more than fifty novels. Among her numerous awards, she was the recipient of the RWA Nora Roberts Lifetime Achievement Award. She lived on the North Fork of the eastern end of Long Island, New York, until her death in 2015.

A Preview for this title is currently not available.
More Books By Bertrice Small
View All