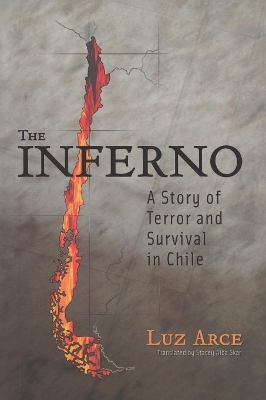 A Story of Terror and Survival in Chile

Description - The Inferno by Luz Arce

As a member of Salvador Allende's Personal Guards (GAP) Luz Arce worked with leaders of the Socialist Party during the Popular Unity Government from 1971 to 1973. In the months following the coup, Arce served as a militant with others from the Left who opposed the military junta led by Augusto Pinochet, which controlled the country from 1973 to 1990. Along with thousands of others in Chile, Arce was detained and tortured by Chile's military intelligence service, the DINA, in their attempt to eliminate alternative voices and ideologies in the country. Arce's testimonial offers the harrowing story of the abuse she suffered and witnessed as a survivor of detention camps, such as the infamous Villa Grimaldi.

Other Editions - The Inferno by Luz Arce » Have you read this book? We'd like to know what you think about it - write a review about Inferno book by Luz Arce and you'll earn 50c in Boomerang Bucks loyalty dollars (you must be a Boomerang Books Account Holder - it's free to sign up and there are great benefits!)

Luz Arce is a freelance writer living in Santiago, Chile.