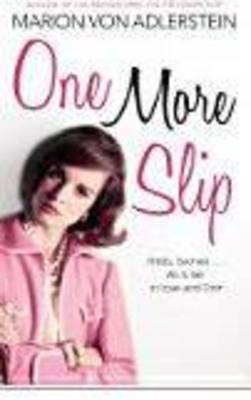 It is the sixties and times are changing. Hemlines are getting shorter, stockings are being discarded and women are doing it for themselves. At the advertising agency of Bofinger, Adams, Rawson & Keane, three women - Desi, Bea and Isabel - are making their way in a man's world. For them jingles and catchphrases are easy - having a life outside the office is so much harder.Adulterous affairs, pining for an overseas love and being used to exact revenge on a former fiancee all take their toll on these three fashionable women. But the changing social landscape means there are surprises in store - and that love can be found in the most unexpected places.

» Have you read this book? We'd like to know what you think about it - write a review about One More Slip book by Marion Von Adlerstein and you'll earn 50c in Boomerang Bucks loyalty dollars (you must be a Boomerang Books Account Holder - it's free to sign up and there are great benefits!)

Born in Sydney, Marion von Adlerstein worked as an advertising copywriter in Melbourne, London and New York in the fifties and sixties. Between 1976 and 1998 she held several posts with Vogue Australia publications, including Travel Director. During those years Marion wrote about many subjects, including fashion, beauty and interiors. She is the author of the non-fiction guides The Passionate Shopper (Penguin) and The Penguin Book of Etiquette and the novels The Freudian Slip and One More Slip.

A Preview for this title is currently not available.
More Books By Marion Von Adlerstein
View All