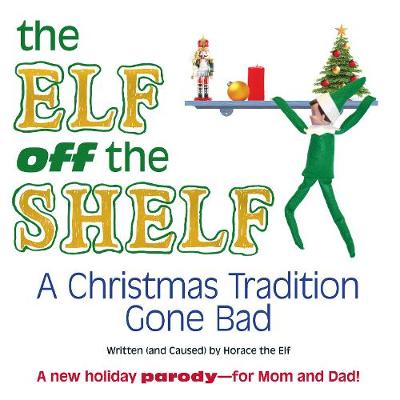 The Elf off the Shelf

Description - The Elf off the Shelf by Horace the Elf

I honestly did believe this shelf gig was going to be great. 'Get out and see the world,' they said. 'Experience the joy of wide-eyed kids, holiday cheer, and the Christmas spirit,' they promised. 'Finally leave your parents' basement for once in two hundred and sixty-seven years,' they told me. I was sold.

And off I went. As a member of Santa's spy squad, I headed down south for the holidays to help the big guy decide who's naughty and who's nice. It was going to be a wonderful change of pace from the screwing, hammering, sanding, painting, and wrapping happening in Ol' St. Nick's workshop.

In this for-parent's-eyes-only parody of the popular holiday title, The Elf on the Shelf, readers laugh along with Horace as he goes AWOL from his Christmas duties. This photo-story set to verse is the unauthorized (and hilarious) tale of one disgruntled little helper with a gift for making mischief.

Buy The Elf off the Shelf by Horace the Elf from Australia's Online Independent Bookstore, Boomerang Books.


Book Reviews - The Elf off the Shelf by Horace the Elf

» Have you read this book? We'd like to know what you think about it - write a review about Elf off the Shelf book by Horace the Elf and you'll earn 50c in Boomerang Bucks loyalty dollars (you must be a Boomerang Books Account Holder - it's free to sign up and there are great benefits!)

Horace the Elf (North Pole) has been a professional elf for many years; his main duties have included suspicions and judgmental tendencies toward children around the world. Now, he's looking out for number one, which doesn't involve the shelf life.