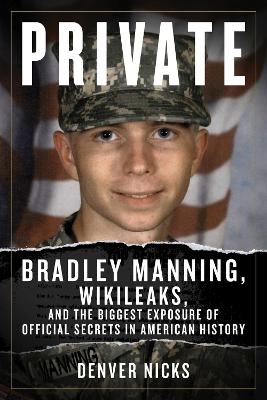 Bradley Manning, WikiLeaks, and the Biggest Exposure of Official Secrets in American History

Beginning in early 2010, Bradley Manning leaked an astounding amount of classified information to the whistleblower website WikiLeaks: classified combat videos as well as tens of thousands of documents from the war in Afghanistan, hundreds of thousands from Iraq, and hundreds of thousands more from embassies around the globe. Almost all of WikiLeaks's headline-making releases of information have come from one source, and one source only: Bradley Manning. Manning's story is one of global significance, yet he remains an enigma. Now, for the first time, the full truth is told about a man who, at the age of only twenty-two, changed the world. Though the overarching narrative in media reports on Manning explain his leaks as motivated by the basest, most self-serving intentions, Private paints a far more nuanced, textured portrait of a man haunted by demons and driven by hope, forced into an ethically fraught situation by a dysfunctional military bureaucracy. Relying on numerous conversations with those who know Manning best, this book displays how Manning's precocious intellect provided fertile ground for his sense of his own intellectual and moral superiority.
It relates how a bright kid from middle America signed on to serve his country and found himself serving a cause far more sinister. And it explains what it takes for a person to betray his orders and fellow troops--and his own future--in order to fulfill what he sees as a higher purpose. Manning's court-martial may be the military trial of the decade, if not the century. This book is a must-read for anyone who wants to understand the man behind it all.

» Have you read this book? We'd like to know what you think about it - write a review about Private book by Denver Nicks and you'll earn 50c in Boomerang Bucks loyalty dollars (you must be a Boomerang Books Account Holder - it's free to sign up and there are great benefits!)

Denver Nicks is a writer based in New York City. Originally from Oklahoma, he has developed a reputation for intrepid reporting in challenging contexts. Nicks has written about street art in Poland, a failed coup in the Philippines, post-coup Honduras, and the hidden working-class underbelly of Wall Street in the midst of the financial meltdown. A Fulbright Scholar, he holds a Master of Science from the Columbia University Graduate School of Journalism. His work has appeared in The Daily Beast, AlterNet, The Nation, and other publications.

A Preview for this title is currently not available.
More Books By Denver Nicks
View All