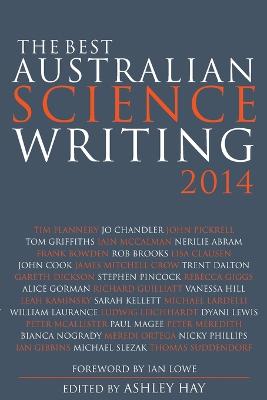 The annual collection celebrating the finest Australian science writing of the year.

Why are Sydney's golden orb weaver spiders getting fatter and fitter? Could sociology explain the recent upsurge in prostate cancer diagnoses? Why were Darwinites craving a good storm during 'The Angry Summer'? Is it true that tuberculosis has become deadlier over time? And are jellyfish really taking over the world?

Now in its fourth year, this popular and acclaimed anthology steps inside the nation's laboratories and its finest scientific and literary minds. Featuring prominent authors such as Tim Flannery, Jo Chandler, Frank Bowden and Iain McCalman, as well as many new voices, it covers topics as diverse and wondrous as our 'lumpy' universe, the creation of dragons and the frontiers of climate science.

» Have you read this book? We'd like to know what you think about it - write a review about Best Australian Science Writing 2014 book by Ashley Hay and you'll earn 50c in Boomerang Bucks loyalty dollars (you must be a Boomerang Books Account Holder - it's free to sign up and there are great benefits!)

Ashley Hay is the author of four books of narrative non-fiction (including Gum: The story of eucalypts and their champions) and two novels. Her 2013 novel The Railwayman's Wife was shortlisted in the NSW Premier's Literary Awards, in which it won the People's Choice Award. She was literary editor of The Bulletin and her science writing has appeared in The Monthly, Australian Geographic and Griffith REVIEW. Her work was awarded one of the inaugural Bragg Prizes for Science Writing in 2012 and shortlisted for a Eureka award.