They kept monkeys in West End hotels, and rent-boys in Deauville and Kensington. They spiced up life in pre-war Britain by patronising illegal gaming clubs and staging elaborate five-in-a-bed sex in stately homes. They used firearms with convincing disregard for their own and others' safety and drove their Rollses and Bentleys with apparently suicidal intent. They acquired yachts and helicopters as they shipped the family silver to California and disposed of Old Masters at auction. They married frequently and unsatisfactorily, humiliating their wives and always withholding from them dynastic secrets of schizophrenia and insanity. Lacking the energy and appetite to do so, they rarely developed their talents. Carpeting their lives with deceit, they sought consolation in ferocious expenditure, funding narcotic and alcohol-fueled blow-outs. They ignored the advice of sane relations, shrugged off trustees, and experimented with burglary, shop-lifting, vagrancy and fraud. Their primary, possibly sole, accomplishment was to drag down their families with them. They were the black sheep of aristocracy and this is their story. 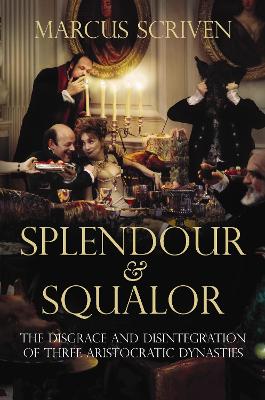 JUICY TALES FROM THE ARISTOS --- BUT DONT BUY YOUR GUILLOTINE YET!

Whenever one hears mention of the aristocracy we want the juicy and sordid bits please (at least that is what the tabloids tell the working classes). So, there is nothing like a dabble in the ‘horrible histories’ department of our peers to get the full facts of the situation. And here we have it with “Splendour and Squalor” by the excellent and diligent writer, Marcus Scriven.

Our reviews are not spoilers so read the book! Christopher Hart’s splendid review writes: “we all have some idea of what a proper English aristocrat should look like borne along by a supreme sense of entitlement, never saying thank you, fearless in the saddle or on the battlefield, inbred, emotionally disconnected and as mad as a hatter”. Well then, all the usual traits are here to character-assassinate a cross section (the top, the elite) of society. But, there is some truth in the comment, naturally.

Atlantic Books and Marcus have produced a smashing read but the best bit is left for the end with the epilogue. The book itself is very well researched and fluently written to the highest standards. It starts with Family Trees and splendid illustrations, then a short, succinct introduction followed by four parts naming the subjects: Edward, Victor, Angus and John. Finally, we have the epilogue with notes and sources plus a rather over-indulgent beginning and end quote from that old ex-commie Denis Healey.

And so, to the epilogue, described as “wonderfully stinging” by Hart who comments that Marcus “acidly concludes” when comparing members of the old order, the behaviour of today’s life peers “convincingly suggests that the new elite has developed the self-regard and advanced sense of entitlement without the intervening centuries of uneven service and sporadic self-sacrifice”. Reviewing this work after Brexit and Trump in 2016 makes one wonder about this “new elite” because underneath we are all much the same except that the aristos’ lives tend to be more charted and developed because of the money and position of the time.

The final word is the final paragraph which brings together some sense to the three dynasties chosen. “It is here”, says Scriven, “in its repository of deformities and oddities and misfits, that the aristocracy and its stud books may perform an enduring service, helping to unlock the mysteries of heredity.” And of course, many of us have links in one way or another to the “elite” or whatever you want to call them as the globe is quite a small place when you are researching relatives.

The author leaves us with the tantalising question when considering the ‘criminal gene’: possibly providing “evidence that what is currently deemed genetic drift – the ‘lucky dip’ of genetic inheritance – is less than random than it appears”.

“At the very least, it will offer an indelible reminder that a rigidly patrilineal interpretation of any single person or family is wholly inadequate.” Yes, which makes, this book, the stories and all our own descendants such interesting subjects for gossip… and books. Well done, Marcus!

Marcus Scriven read history at Oxford before becoming a journalist. He is a leading contributor to UK TV's documentary on Victor Hervey, 6th Marquess of Bristol, which broadcast in 2009. Splendour and Squalor is his first book.