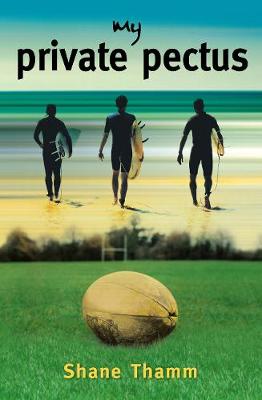 "There's something different about my body. It's not something I'm proud of either, not something I show anyone. It's like the missing piece of a jigsaw you can't take your eyes off. If I were to take off my shirt you wouldn't see my face, my freckles or ratty hair. You'd just suck your cheeks in and stare. All you'd see is the depression in the middle of my chest."

A realistic story about cars, footy, a love interest, and the commonly forgotten ingredient: a young man's emotions.

Other Editions - My Private Pectus by Shane Thamm 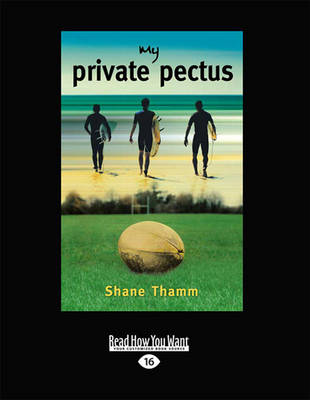 » Have you read this book? We'd like to know what you think about it - write a review about My Private Pectus book by Shane Thamm and you'll earn 50c in Boomerang Bucks loyalty dollars (you must be a Boomerang Books Account Holder - it's free to sign up and there are great benefits!)

It’s part of being human that we try to fix the things that seem wrong in our life. Even if we go about it in the wrong way, the effort put into fixing things can be significant. But sometimes the ‘thing’ is just a bit too hard. What then?

Shane Thamm has written a book about a boy trying to fix something that’s just a bit too hard. He’s got a physical condition known as Pectus Excavatum. A flatmate with PE back in my single years called it ‘sunken chest’ and was well stocked with jokes about Davey Jones. Our cohort took little interest in his chest and the flatmate was pretty laconic about it as well.

Not so the Jack (Sticks) of My Private Pectus. Sticks finds the condition embarrassing and intolerable, and he is constantly having to put his fixing skills into action. Touble is, he’s not much good at fixing up his life and his fixit attempts leave more damage. It’s just a bit too hard. So he translates his fixing ability to that common male metaphor, the motor car.

The car does not belong to Sticks but to his best friend. A couple of high school kids doing up an old Nissan Bluebird. It’s a bit of a bomb but Sticks proves up to it and so rebuilding the car becomes the bones upon which Sticks builds some pretty significant expectations.

Thamm has thrown another fixit dilemma into the story. Sticks’ dad. A lot of books about boys becoming men feature the father son relationship, but Thamm has given this father an extra edge. He’s also trying to fix his life. And the bones upon which he tries to build a new self is being the coach of the footy team at Sticks’ school. Does Sticks like footy? Sorrry, can’t tell you that. Some things you just have to find out for yourself.

Men do this, you know. They form these attachments to exoskeletons such as junky old Nissan Bluebirds and footy teams in the hope that some meaning will emerge to satisfy their inner vacuum. They don’t work. But it’s the male way (men’s not so secret business) and will have to do until a deeper reality comes along in some recognisable form.

Sticks finds that his relationship with the mate’s Nissan folds up underneath him. His own fault, of course. Everything else is also going wrong and it seems as if disaster has struck on several levels. But when everything happens at once he is forced to find his own reality and to rely on that, no matter the outcome. Without the Bluebird he starts to find something that only one other person can see within him. Trouble is, he’s also pissed that person off something fierce. And if there is one area of life that Sticks proves he doesn’t understand, it’s girls.

I mentioned the dad. His exoskeleton also fails. They all do in the end. And in the end we are forced back into our own reality, often enough a reality that we have denied for yonks. It’s a bit hard to tell if it’s a shrinking or an emergence, but Sticks’ dad manages to chuck it all in and tell the truth at last. Sadness or victory? Make up your own mind.

My Private Pectus is the story of a teenage boy struggling with a physical condition, but underneath there is the archetype of a father / son struggle for dominance. The toxic nature of this particular story is that each one is trying to define himself in terms of what the other is not. It’s normal for the son to do that, but not the father.

Shane Thamm has given us a story peppered with the good natured humour of teenagers who just want to be mates without the complications of responsibility, parents, or school. Between the beer, the bong, and the talk about girls, things seem to go along easily enough most of the time. But there are a few crunch times along the way.

The voice of Sticks is realistic as we see his inner conflicts and frustrations boil over into some pretty dicey behaviour. The story is well told and holds together well, taking us through some unexpected territory in the telling.

Oh yeah. It’s not really about ribs and sternums and cartilage out of control. But you already knew that.

Jack has PE — Pectus Excavatum, a condition that causes a sunken chest — and I don’t mean the kind that pirates covet. As if this isn’t enough to deal with, his father, once a great footballer, insists Jack join the school footy team. Football is a game he has no interest in, especially as it’s one that invariably ends with a change-room filled with bare-chested males. Then there’s the problem of girls: How will he ever get a girlfriend with such an obvious deformity?

On reading the back cover blurb: ‘A story about footy, cars and a young man who discovers that revealing his greatest secret is the only way to hold onto the people he loves’ I groaned inwardly.

But what a surprise this story was! Thamm’s dry, no nonsense, almost factual narrative creates a refreshing contrast to complex, well-rounded characters that I actually found myself caring about.

If I only had one word to describe this story it would have to be: ‘honest’. Thamm’s honesty and insight into the male condition no doubt come from his years of experience working in high school outdoor education--as well as his study of masculinities as part of an Arts degree at Brisbane’s QUT.

And while on the subject of honesty, it should be noted that Thamm has glossed over nothing. This story contains drug and alcohol use, language that may be viewed by some as inappropriate, and sexual themes. However, it should also be noted that the author has in no way glorified these subjects, and, in fact, one incident in particular at Gez’s eighteenth should serve as a timely warning for many.

An ode to manhood, My Private Pectus is bound to attract a predominately male readership, though girls should be encouraged to give this one a go as well, if only in the name of research.

Frank, hard-hitting and edgy: My Private Pectus should be compulsory reading for anyone who wants to understand what it means to be male.

Shane Thamm wrote My Private Pectus while studying masculinities at Queensland University of Technology. After six years working in high school outdoor education, and the masculinised outdoor adventure industry, he became intimately interested in what makes young men tick, and the emotional challenges they negotiate each day, often in silence. He likes to give these boys a voice.