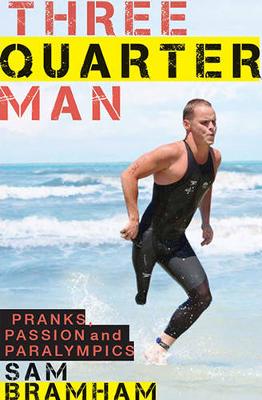 Sam Bramham entered Paralympic competition with a splash when he broke the 100-metre Butterfly world record at the 2004 Athens Paralympics, aged just 16. Since then he has travelled the world, blazing a trail of triumph over adversity and getting into more than a little mischief along the way.

Sam had his right leg amputated at the age of five but has never let his disability get in the way of his dreams, or to quell his larrikin spirit. He caused an international incident at one Paralympics after convincing a pesky American journalist that his leg was chewed off by a kangaroo, and spent a night in the slammer after he and his stupid mates faked a shark attack on a packed NSW beach. He's a hilarious example of how youthful exuberance can go spectacularly wrong when you've only got one leg. Despite the shenanigans, Sam is an inspiration to all. He is perhaps the only reprobate to be awarded the Order of Australia Medal (OAM) for services to his country and for being a role model for Australian youth. With his competitive spirit still burning, Three-Quarter Man sees Sam on the road to Rio in his quest to win gold in the first ever Paralympic triathlon.

» Have you read this book? We'd like to know what you think about it - write a review about Three Quarter Man book by Sam Bramham and you'll earn 50c in Boomerang Bucks loyalty dollars (you must be a Boomerang Books Account Holder - it's free to sign up and there are great benefits!)

Sam Bramham won a clutch of medals in swimming at the 2004 and 2008 Paralympics, and is currently training for the first ever Paralympic triathlon at the Rio Paralympics in 2016. His success as an elite sportsman is matched only by his love for life and a good joke. He has received an Order of Australia Medal (OAM) for being an exceptional role model for Australian youth. Sam is also a hugely entertaining and successful public and motivational speaker, and is a frequent contributor to ABC and SEN.