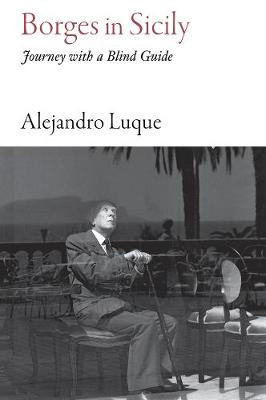 Borges in Sicily: Journey with a Blind Guide

Description - Borges in Sicily: Journey with a Blind Guide by Alejandro Luque

When Alejandro Luque receives a book of photographs taken in Sicily by the Argentinian writer, essayist, and poet Luis Borges, he decides to trace the writer's journey, setting off with a group of friends on his own Sicilian odyssey. Meticulously identifying the location of each photograph, Luque uses Borges's pictures to imagine the range of emotions that the renowned writer felt as he experienced the same views. As his hunt for the locations of the original photographs unfolds, Luque chronicles the ways in which he begins to fall in love with both the island itself and with his friend, Ro.

This winding journey features literati both past and present, indigenous and foreign. These characters live alongside Luque's own comments and observations in a narrative that is rich in historical and personal detail. The writer who inspired this great journey, Borges himself, becomes a character in this narrative that is infused with extracts and reflections from his essays and poetry. Borges in Sicily acts as a travel diary, a guide to the most fascinating places in Sicily, a recounting of Borges's journey around the island, and a deeply poetic story of Luque's own adventures. The book also includes twenty-three photographs from the renowned Magnum photographer Ferdinando Scianna, and it won the 1st Premio International del Libros de Viajes.

Book Reviews - Borges in Sicily: Journey with a Blind Guide by Alejandro Luque

» Have you read this book? We'd like to know what you think about it - write a review about Borges in Sicily: Journey with a Blind Guide book by Alejandro Luque and you'll earn 50c in Boomerang Bucks loyalty dollars (you must be a Boomerang Books Account Holder - it's free to sign up and there are great benefits!)


A Preview for this title is currently not available.
More Books By Alejandro Luque
View All