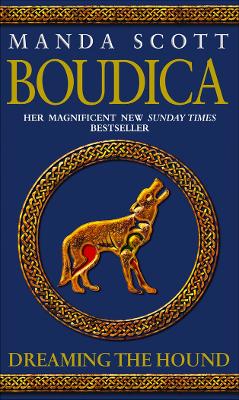 A Novel of Roman Britain: Boudica 3

From THE SUNDAY TIMES bestselling author Manda Scott, this is the third magnificent instalment of the epic retelling of the life of Britain's great warrior queen."The richness of colour and vibrancy of style have become the hallmarks of Scott's ambitious series." --YORKSHIRE EVENING POST"Scott has teased a few facts from the ancient record to create an absorbing story from history and myth." -- Publishers Weekly"Scott can write about spear-throwing and sword cuts as though she had experienced them herself" - THE TIMES LITERARY SUPPLEMENT"It arouses passion and takes the reader straight into the ancient world of Britain under Roman rule. An exciting read for those who just want a bit of shock and awe in their lives..." -- ***** Reader review"This was a "one-more-chapter" type of book so that for several nights I only put aside the book when I could no longer focus on the page and almost dropped-off with the book open in front of me." -- ***** Reader review"Amazing writing, spell-binding, transporting..." -- ***** Reader review*********************BRITAIN HAS PRODUCED MANY FIERCE, NOBLE WARRIORS DOWN THE AGES WHO HAVE FOUGHT TO KEEP BRITAIN FREE, BUT THERE WAS ONE FORMIDABLE LADY IN HISTORY WHOSE NAME WILL NEVER BE FORGOTTEN...AD 57- much of Britannia has been under Roman occupation for over ten years, where the tribes pay costly tithes to the Emperor in return for the right to continue living on their own lands.On the sacred isle of Mona, the Boudica or Bringer of Victory as Breaca has long been hailed, now knows for certain that her lover, Caradoc - betrayed, captured and kept hostage in Rome - will never return to her.She decides to leave Mona and to take the fight to the Eceni heartland where it is needed most. But the once proud Eceni are a downtrodden and defeated people who are forbidden to worship their old gods, and now scrape a living from the once fertile land.Across the sea in Hibernia, Breaca's half-brother Ban, struggles to make peace with his fractured past. Soon, provoked by Roman aggression, he will sail to Britain and, united with his sister, he and Breaca will face down the might of Rome in the bloodiest revolt the western world has ever known.Boudica's story continues in Boudica- Dreaming the Serpent Spear. Have you read Boudica- Dreaming the Eagle and Boudica- Dreaming the Bull, the first two instalments of the Boudica story?

» Have you read this book? We'd like to know what you think about it - write a review about Boudica: Dreaming The Hound book by Manda Scott and you'll earn 50c in Boomerang Bucks loyalty dollars (you must be a Boomerang Books Account Holder - it's free to sign up and there are great benefits!)

Manda Scott is a veterinary surgeon, writer and climber. Born and educated in Scotland, she now lives in Suffolk with two horses, two lurchers and too many cats. Manda Scott first made her name as a crime writer. Her debut novel, Hen's Teeth, was shortlisted for the Orange Prize. Her subsequent novels are Night Mares, Stronger than Death and No Good Deed, for which she was hailed as 'one of Britain's most important crime writers'. Dreaming the Eagle and Dreaming the Bull, the first and second books in the Boudica series, are also published by Bantam Books and the fourth book, Dreaming the Serpent Spear, by Bantam Press. For more information on Manda Scott and her books, visit her website at wwww.mandascott.co.uk