Pianist Mike Garson was David Bowies most frequent musician, on record and onstage throughout Bowies life. They played over a thousand shows together between 1972 and 2004, and Garson is featured on over 20 of Bowies albums. Bowies Piano Man is the first-ever biography of Mike Garson, written by Clifford Slapper, a fellow pianist who also played for Bowie, working closely with him on his last-ever television appearance. The book explores the special relationship between Garson and Bowie, beginning with the extraordinary story of how Garson went overnight from playing in tiny jazz clubs to touring the world on arena rock tours with Bowie after one short phone call and audition. A noted master of jazz, classical, and other genres, Garson has composed thousands of original works and has taught countless students, acting as mentor to many. Bowies Piano Man explores his roots and childhood in Brooklyn, his ongoing strong presence in the jazz world, and his collaborations with a huge range of other artists in addition to Bowie. Touring and recording with the Smashing Pumpkins and Nine Inch Nails are given in-depth attention, as is his approach to teaching and creating music. Explored in detail in particular is his commitment to improvisation as a form of composition, a manifestation of his more general dedication to living in the moment and always moving forward a trait he shared with Bowie. 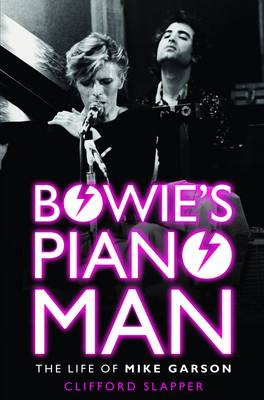 » Have you read this book? We'd like to know what you think about it - write a review about Bowie's Piano Man book by Clifford Slapper and you'll earn 50c in Boomerang Bucks loyalty dollars (you must be a Boomerang Books Account Holder - it's free to sign up and there are great benefits!)

CLIFFORD SLAPPER (London, England) grew up against the background of the glam-rock scene. He became a pianist, having been inspired, at age 11, by Mike Garson s piano on Bowie s 1973 album Aladdin Sane. Going on to be one of the UK s top pianists, playing with many great artists such as Boy George, Marc Almond, and Lisa Stansfield, he finally worked closely with David Bowie himself, playing for him on his last-ever television appearance. He also works as a producer, arranger, and composer and has recently produced the album Bowie Songs One, which reinterprets Bowie s songs acoustically for piano and voice.

A Preview for this title is currently not available.
More Books By Clifford Slapper
View All