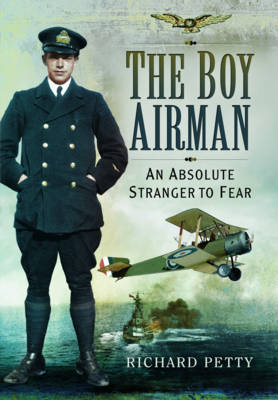 An Absolute Stranger to Fear

The life of many combatants in The Great War was often short and brutish. But there were choices for some. Taking to the air was an attractive alternative to the slime, stench and gore of the trenches. The prospect of flying in the Royal Navy, the Senior Service, Nelson's Navy, must have been irresistible to any adventurous teenager the best aeroplanes on the best ships with the best sailors that ever existed or so he might have been led to believe. The Royal Naval Air Service was sorely tested, and not necessarily by the enemy. The casualties of the sea and its perils, and of accident and mechanical failure, were catastrophic. But this critical battle between young pilots in their infant flying machines and unpredictable events forged the pathway for our modern conceits of war missiles, drones, giant aircraft carriers, weapons of space. A hundred years ago a young pilot took illicit photographs with his pocket camera and left a personal account of his life at sea with his 'kite'. This book tells his story illustrated by his long-lost 'snaps' AUTHOR: Richard Petty is a London medical practitioner. He is the author of Plastic Surgery: Its Origins, an account of the life and works of the father of plastic surgery, Sir Harold Gillies. SELLING POINTS: A highly illustrated account of life as a pilot in the Royal Naval Air Service during the First World War. Accompanied by photographs that he took during the course of his service. Also features a separate and equally engaging account of the First World War written by his son, Richard Petty. 150 b/w illustrations

» Have you read this book? We'd like to know what you think about it - write a review about Boy Airman book by Richard Petty and you'll earn 50c in Boomerang Bucks loyalty dollars (you must be a Boomerang Books Account Holder - it's free to sign up and there are great benefits!)

Richard Petty is a London medical practitioner. He is the author of Plastic Surgery: Its Origins, an account of the life and works of the father of plastic surgery, Sir Harold Gillies.

A Preview for this title is currently not available.
More Books By Richard Petty
View All

Attitudes And Persuasion: Classic And Contemporary Approaches
No Stock on Hand, Supplier Has No Due Date for Supply.
$217.80 $242.00