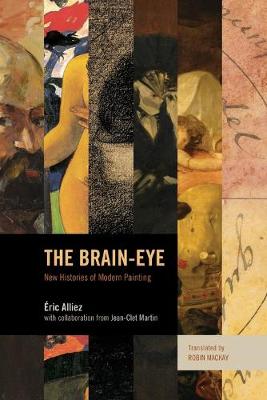 Description - The Brain-Eye by Eric Alliez

A detailed and inventive study of the thinking at work in modern painting, drawing on a formidable body of scholarly evidence to challenge modernist and phenomenological readings of art history, The Brain-Eye presents a series of interlinked 'case studies' in which philosophical thought encounters the hallucinatory sensations unleashed by 'painter-researchers.'
Rather than outlining a new 'philosophy of art,' The Brain-Eye details the singular problems pursued by each of its protagonists. Striking readings of the oeuvres of Delacroix, Seurat, Manet, Gauguin, and Cezanne recount the plural histories of artists who worked to free the differential forces of colour, discovered by Goethe in his Colour Theory, in the name of a "true hallucination" and of a logic proper to the Visual.
A rigorous renewal of the philosophical thinking of visual art, The Brain-Eye explores the complex relations between concept and sensation, theory and practice, the discursive and the visual, and draws out the political and philosophical stakes of the aesthetic revolution in modern painting.

Other Editions - The Brain-Eye by Eric Alliez » Have you read this book? We'd like to know what you think about it - write a review about Brain-Eye book by Eric Alliez and you'll earn 50c in Boomerang Bucks loyalty dollars (you must be a Boomerang Books Account Holder - it's free to sign up and there are great benefits!)

Eric Alliez is Professor of Contemporary French Philosophy at Kingston University, London, and Professor of Aesthetics at Paris 8. His many publications in both English and French include The Signature of the World (2004), La Pensee-Matisse (2005) and Defaire l'image (2013). Jean-Clet Martin is former programme director at the College International de Philosophie, Paris. Robin Mackay, the translator, is director of Urbanomic and editor of its journal, Collapse. He has translated a number of works of French philosophy, including Alain Badiou's Number and Numbers, Francois Laruelle's The Concept of Non-Photography and Anti-Badiou and Quentin Meillasoux's The Number and the Siren.

A Preview for this title is currently not available.
More Books By Eric Alliez
View All