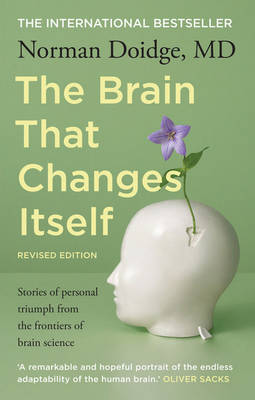 The Brain That Changes Itself: Stories Of Personal Triumph FromThe Frontiers Of Brain Science

Description - The Brain That Changes Itself: Stories Of Personal Triumph FromThe Frontiers Of Brain Science by Norman Doidge

An astonishing new scientific discovery called neuroplasticity is overthrowing the centuries-old notion that the adult human brain is fixed and unchanging. It is, instead, able to change its own structure and function, even into old age.

An astonishing new scientific discovery called neuroplasticity is overthrowing the centuries-old notion that the adult human brain is fixed and unchanging. It is, instead, able to change its own structure and function, even into old age.

Psychiatrist and rersearcher Norman Doidge, MD, travelled around the United States to meet the brilliant scientists championing neuroplasticity, and the people whose lives they've transformed - people whose mental limitations or brain damage were previously seen as unalterable, and whose conditions had long been dismissed as hopeless.

We see a woman born with half a brain that rewired itself to work as a whole; a woman labeled retarded who cured her deficits with brain exercises and now cures those of others; blind people who learn to see; learning disorders cured; IQs raised; ageing brains rejuvenated; stroke patients recovering their faculties; children with cerebral palsy learning to move more gracefully; entrenched depression and anxiety disappearing; and lifelong character traits changed.

Doidge takes us onto terrain that might seem fantastic. We learn that our thoughts can switch our genes on and off, altering our brain anatomy. We learn how people of average intelligence can, with brain exercises, improve their cognition and perception, develop muscle strength, or learn to play a musical instrument - simply by imagining doing so.

Using personal stories from the heart of this neuroplasticity revolution, Dr Doidge has written an immensely moving, inspiring book that will permanently alter the way we look at our brains, human nature, and human potential.

'In bookstores, the science aisle generally lies well away from the self-help section, with hard reality on one set of shelves and wishful thinking on the other. But Norman Doidge's fascinating synopsis of the current revolution in neuroscience straddles this gap- the age-old distinction between the brain and the mind is crumbling fast as the power of positive thinking finally gains scientific credibility ... Mind-bending, miracle-making, reality-busting stuff with implications for all human beings, not to mention human culture, human learning and human history.'
-Abigail Zuger, MD, The New York Times

'An utterly wonderful book - without question one of the most important books about the brain you will ever read; yet it is beautifully written, immensely approachable, and full of humanity. Its message is one of hope- it is not just our brains that shape our thinking, but our thinking that, very definitely, shapes our brains.'
-Iain McGilchrist MA (Oxon), BM, FRCPsych, FRSA author of The Master and His Emissary, The Divided Brain, and the Making of the Western World

'Only a few decades ago, scientists considered the brain to be fixed or 'hardwired' and considered most forms of brain damage, therefore, to be incurable. Dr. Doidge, an eminent psychiatrist and researcher, was struck by how his patients' own transformations belied this and set out to explore the new science of neuroplasticity by interviewing both scientific pioneers in neuroscience, and patients who have benefited from neuro-rehabilitation. Here he describes in fascinating personal narratives how the brain, far from being fixed, has remarkable powers of changing its own structure and compensating for even the most challenging neurological conditions. Doidge's book is a remarkable and hopeful portrait of the endless adaptability of the human brain.'
-Oliver Sacks

Book Reviews - The Brain That Changes Itself: Stories Of Personal Triumph FromThe Frontiers Of Brain Science by Norman Doidge

» Have you read this book? We'd like to know what you think about it - write a review about Brain That Changes Itself: Stories Of Personal Triumph FromThe Frontiers Of Brain Science book by Norman Doidge and you'll earn 50c in Boomerang Bucks loyalty dollars (you must be a Boomerang Books Account Holder - it's free to sign up and there are great benefits!)

Norman Doidge, MD, is the author of the best-selling book, The Brain That Changes Itself: personal triumph from the frontiers of brain science, which has sold over one million copies worldwide. Dr Doidge is a psychiatrist, psychoanalyst, researcher, author, essayist and poet. He is on the Research Faculty at Columbia University's Center for Psychoanalytic Training and Research, in New York, and the University of Toronto's Department of Psychiatry. He is a native of Toronto. Visit him at www.normandoidge.com.

Brain's Way of Healing: Remarkable discoveries and recoveries from the frontiers of neuroplasticity,
$28.00 $35.00

The Elusive Obvious: The Convergence of Movement, Neuroplasticity, and Health
$46.29 $51.43