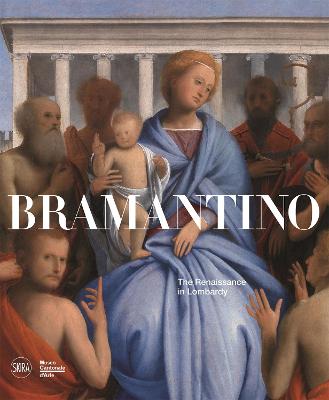 One of the most iconic personalities of the northern Italian Renaissance, Bartolomeo Suardi, better known as Bramantino, is a leading figure from that phase of cultural crisis and figurative renewal which radically transformed the language of painting in Lombardy at the time of the fall of the Sforza dynasty and the French occupation of the region, between the late 15th century and the 1520s. The volume traces the artist's career starting from his debut as an assistant of the architect and painter Donato Bramante - which earned him the nickname by which he remains known today - down to his last attested works, including Flight into Egypt . Alongside masterpieces by Bramantino - some of which restored for the Swiss exhibition - from leading institutions such as the London National Gallery, the Uffizi Gallery in Florence, the Thyssen-Bornemisza Museum in Madrid and the Pinacoteca di Brera, the volume presents the works of artists who shared the stage with Bramantino: from Bergognone and Bernardo Zenale to the painters who inherited his artistic legacy, such as Bernardino Luini and Gaudenzio Ferrari. Bramantino's oeuvre is compared to paintings, drawings, illuminations, sculptures and jewellery that illustrate the most important figurative tendencies of his day, within the context of a dense web of exchanges and strong shows of resistance. Finally, a close comparison with Leonardo's studies is seen to suggest that, contrary to established assumptions, Bramantino was charmed by the language of the Tuscan artist, which also influenced his later works.

» Have you read this book? We'd like to know what you think about it - write a review about Bramantino book by Mauro Natale and you'll earn 50c in Boomerang Bucks loyalty dollars (you must be a Boomerang Books Account Holder - it's free to sign up and there are great benefits!)

Mauro Natale teaches at the University of Geneva. He was the curator for several exhibitions of Italian painting between the 15th and 16th centuries.

A Preview for this title is currently not available.
More Books By Mauro Natale
View All