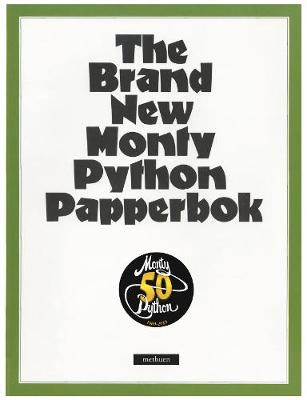 October 2019 marks the fiftieth anniversary of the first broadcast of Monty Python's Flying Circus on BBC Television. Back by popular demand... The extraordinary comic genius of Monty Python is on full display in this humour classic. One of the most original and ground-breaking humour classics of all time, the Papperbok was compiled for Methuen in the early-1970s by the young Monty Python team at the height of their creative powers, and was published on the heels of the improbable success of the Monty Python's Flying Circus television series. A surreal delight, the Papperbok broke the mould for tie-in books, and was a testing ground for ideas equally as fresh and funny as the Flying Circus material. It is full of colourful and rude illustrations by Terry Gilliam, odd-ball instruction sheets, cod schoolboy stories about adventure and mischief, misleading horoscopes, informative and thrilling features such as 'Hamster: A Warning', 'The Python Book of Etiquette', and 'The London Casebook of Detective Rene Descartes', zany competitions, fake editorials, spurious film reviews, and some of the oddest miscellany ever pressed between the pages of a book. Monty Python Graham Chapman's education and vocational training occurred variously in such places as the Midlands, Eton, the University of Cambridge, St Swithin's Hospital, on tour in a revue with John Cleese in New Zealand and on the island of Ibiza with David Frost. He was the author of A Liar's Autobiography and he also wrote for Monty Python's Flying Circus and the TV show Doctor in the House. Graham Chapman died in 1989. John Cleese was educated at the University of Cambridge where he performed in Footlights and then went to work in London as a performer and as a comedy writer for the BBC. Besides his work with Python he is best known for his TV series Fawlty Towers (co-written with Connie Booth), the books he has written with psychologist Robin Skinner and films such as Clockwise, A Fish Called Wanda and Fierce Creatures. Eric Idle was educated at the University of Cambridge where he joined the Footlights Club becoming president of the club in 1965. He created and acted in The Rutles and has appeared in numerous films including The Adventures of Baron Munchausen and wrote the book, and co-wrote the lyrics, for the award-winning musical Spamalot (based on Monty Python & The Holy Grail). Educated at the University of Oxford, Terry Jones worked in theatre, and wrote revues and scripts for the BBC before becoming one of the creators of Monty Python. He has written many books for children and is also the author (with other scholars) of Who Murdered Chaucer? and a study of Chaucer's Knight. He has directed such films as Personal Services, Erik the Viking and The Wind in the Willows, along with all the Python films. Michael Palin was born in Sheffield in 1943 and lives with his wife Helen in North London. His adventures around the world have been huge bestsellers. His books (all of which have accompanied his documentaries for the BBC) include Around the World in 80 Days, Pole to Pole, Full Circle, Sahara and Himalaya. His films have included The Missionary and A Private Function. As part of the Monty Python team, Terry Gilliam produced the series' bizarre animations as well as performing. His subsequent career has encompassed animation and film-making, and he has directed films including The Adventures of Baron Munchausen, Brazil, Twelve Monkeys and Fear and Loathing in Las Vegas.

» Have you read this book? We'd like to know what you think about it - write a review about Brand New Monty Python Papperbok, The book by Monty Python and you'll earn 50c in Boomerang Bucks loyalty dollars (you must be a Boomerang Books Account Holder - it's free to sign up and there are great benefits!)


A Preview for this title is currently not available.
More Books By Monty Python
View All