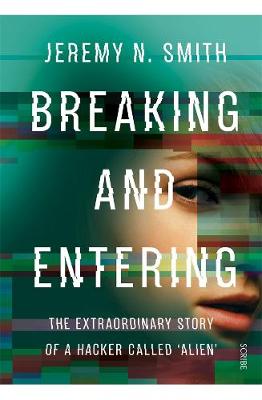 Breaking and Entering: The Extraordinary Story of a Hacker Called 'Alien'

Description - Breaking and Entering: The Extraordinary Story of a Hacker Called 'Alien' by Jeremy Smith

Hackers know everything about us. We know almost nothing about them. Until now.

Hackers know everything about us. We know almost nothing about them. Until now.

The hacker now known as Alien entered MIT in 1998, intending to major in aerospace engineering. Almost immediately, she was recruited to join a secret student group scaling walls, breaking into buildings, pulling elaborate pranks, and exploring computer systems. Within a year, one of her hall mates was dead, two others were on trial, and three had been institutionalised. And Alien's adventures were only beginning.

Breaking and Entering is a whirlwind history of the last 20 years of hacking and cybersecurity. As Alien develops from teenage novice to international expert, she joins the secret vanguard of our digitised world, and reveals the forces at work behind our everyday technology.
'A novelistic tech tale that puts readers on the front lines of cybersecurity. For all whose lives and connections depend on the internet - nearly everyone - this biography of the pseudonymous "Alien" provides a fast-paced cautionary tale. Jeremy Smith has enough experience as a computer programmer to understand the technicalities of this world, but his storytelling makes it intelligible to general readers; indeed, the narrative is more character-driven than technology-driven ... Smith goes into great detail to demonstrate how Alien could penetrate the security of whomever was employing her, showing how a real criminal would do it, and makes fearfully clear that there is "no such thing as absolute security in this world, or any definitive and final fixes." A page-turning real-life thriller, this is the sort of book that may leave readers feeling both invigorated and vulnerable.' STARRED REVIEW
-Kirkus

'Smith's writing style ... is crisp as he charts the course of Alien's life in a series of vignettes from uncertain undergraduate to successful business owner. The structure works because Smith is a lively storyteller.'
-The New York Times Book Review

'In Breaking and Entering, Jeremy Smith reveals the human side of cybersecurity. The book covers the vast spectrum of why and how hackers do what they do. A great thriller!'
-Paul de Souza, Founder, Director, and President of the Cyber Security Forum Initiative

Book Reviews - Breaking and Entering: The Extraordinary Story of a Hacker Called 'Alien' by Jeremy Smith

» Have you read this book? We'd like to know what you think about it - write a review about Breaking and Entering: The Extraordinary Story of a Hacker Called 'Alien' book by Jeremy Smith and you'll earn 50c in Boomerang Bucks loyalty dollars (you must be a Boomerang Books Account Holder - it's free to sign up and there are great benefits!)

The Australian Students' Guide to Writing and Grammar
Claire Duffy
$22.39 $27.99