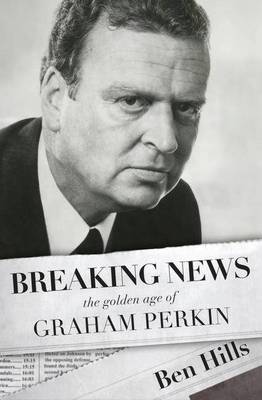 The Golden Age of Graham Perkin

It is now more than 30 years since Graham Perkin's tragically premature death, but his legacy lives on in every corner of the Australian media. Perkin was, without question, the country's greatest editor of the 20th century. In his nine years at the helm of The Age , he transformed a venerable but moribund rag into a paper regularly voted one of the world's 10 best broadsheets, alongside such great titles as The Washington Post and The Times of London. He changed forever the way that the media looks at society, and the way that people relate to the media. Walkley Award winner Ben Hills, who worked under Perkin's editorship for six years, chronicles the life and times of Australia's most influential newspaper editor, and the history of the newspaper to which he devoted his tremendous talents. From a little town in Victoria's dusty Mallee to the door of the Fairfax boardroom, from the twilight of the Menzies era to the death throes of the Whitlam government, from formulaic, moth-balled reportage to socially responsible investigative journalism, Breaking News paints a vivid picture of Graham Perkin's remarkable career.
It is a portrait of media power, of the last of the great editors who, by the force of their convictions, made a difference to society - a breed for whom there is no place in today's corporate media conglomerates, with their focus on cost-cutting and the short-term bottom line.

» Have you read this book? We'd like to know what you think about it - write a review about Breaking News book by Ben Hills and you'll earn 50c in Boomerang Bucks loyalty dollars (you must be a Boomerang Books Account Holder - it's free to sign up and there are great benefits!)

Ben Hills is an award-winning Australian investigative reporter and foreign correspondent with more than 50 years of experience. He has worked as a reporter for the Age and the Sydney Morning Herald and as a producer for the television show 60 Minutes.

A Preview for this title is currently not available.
More Books By Ben Hills
View All