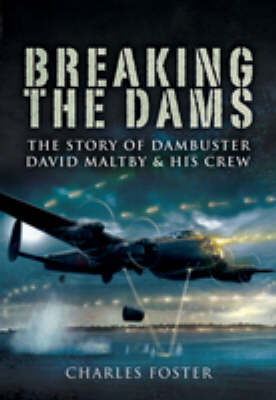 The Story of Dambuster David Maltby and His Crew

This is the story of the author's uncle, David Maltby and the crew with whom he flew on the famous Dam Raid in 1943. Just five months later, on their return from an aborted mission to bomb the Dortmund Ems Canal, they all died when their aircraft went down in the North Sea. Only David's body was recovered, washed ashore a day later, and identified by his 18 year old sister - the author's mother. David was the pilot of the fifth Lancaster, J-Johnny' to drop a bomb on the Mohne Dam and cause the final breach in the dam. He was then just 23 years of age, but already had 30 operations and a DFC to his name. This book tells the story of the crew, what made them join the RAF when they new the risk was so high, how fate threw them together, what it was like for one crew to take part in the raid and what happened to them in the five months between Operation Chastise and their deaths. It goes beyond the raid to look at what happened afterwards and how the families left behind were affected. Their sons, brothers and fathers might have become famous but they had to cope with life and loss in the same way as did thousands of other British families. AUTHOR Charles Foster has spent his working life in publishing and journalism. He is now a frelance writer, editor and designer and lives in Dublin.

» Have you read this book? We'd like to know what you think about it - write a review about Breaking the Dams book by Foster Charles and you'll earn 50c in Boomerang Bucks loyalty dollars (you must be a Boomerang Books Account Holder - it's free to sign up and there are great benefits!)


A Preview for this title is currently not available.
More Books By Foster Charles
View All

The Story of the Bible from Genesis to Revelation Told in Simple Language for the Young
$98.95 $109.94