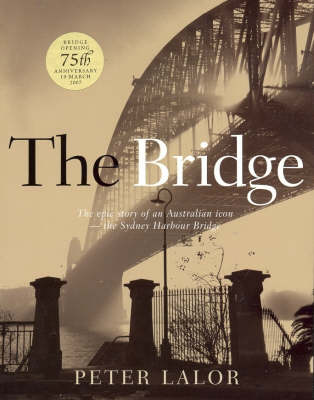 The Epic Story of an Australian Icon - the Sydney Harbour Bridge

Description - The Bridge by Peter Lalor

'. . . in world terms, that great arch defined Sydney and for the most part, Australia . . .' - Hon. Paul Keating, former Prime Minister of Australia

When it was finally opened in March 1932, the Sydney Harbour Bridge had taken almost nine years to complete at a cost of sixteen lives and more than six million pounds. This is the epic story of the most recognisable symbol of Australia, and the people, political wranglings and incredible feats of engineering behind its creation.

The Bridge brings to life the stories of those who built it, dreamt it and were drawn to it: Lennie Gwyther, the nine-year-old boy who made a 900-mile solo journey on horseback to witness the opening; Dr J.J.C. Bradfield who eventually realised his dream of connecting Sydney's two shores; Vince Kelly, the larger-than-life boilermaker who fell from the arch and survived; and many other fascinating characters.

From the bizarre attempt to sabotage the bridge's opening ceremony to its role in the Sydney Olympics, this is a lively history of one of the world's most famous structures.

» Have you read this book? We'd like to know what you think about it - write a review about Bridge book by Peter Lalor and you'll earn 50c in Boomerang Bucks loyalty dollars (you must be a Boomerang Books Account Holder - it's free to sign up and there are great benefits!)

Peter Lalor is an award-winning author and journalist. Now a senior sports writer with The Australian, he has contributed articles to The Weekend Australian Magazine, Rolling Stone, Black + White Magazine, Luxury Travel and a number of books and international publications. In his two decades as a journalist he has covered numerous major stories including the Bali bombings, the Hoddle St massacre, the Tampa crisis, the Sydney and Athens Olympics and the Australian cricket team's 2004 tour of India. In 2002 his first book, Blood Stain, was published by Allen + Unwin. It became an instant bestseller and won the 2003 Ned Kelly Award for Best True Crime Writing and is the subject of a Discovery Channel documentary.

A Preview for this title is currently not available.
More Books By Peter Lalor
View All