A Guardian Best Book of the Year

?Helps explain how we got to today's alt-right.?
?Terry Gross, Fresh Air

The white power movement in America wants a revolution.

Returning to a country ripped apart by a war they felt they were not allowed to win, a small group of Vietnam veterans and disgruntled civilians who shared their virulent anti-communism and potent sense of betrayal concluded that waging war on their own country was justified. The command structure of their covert movement gave women a prominent place. They operated with discipline, made tragic headlines in Waco, Ruby Ridge, and Oklahoma City, and are resurgent under President Trump. Based on a decade of deep immersion in previously classified FBI files and on extensive interviews, Bring the War Home tells the story of American paramilitarism and the birth of the alt-right.

?A much-needed and troubling revelation? The power of Belew's book comes, in part, from the fact that it reveals a story about white-racist violence that we should all already know.?
?The Nation

?Fascinating? Shows how hatred of the federal government, fears of communism, and racism all combined in white-power ideology and explains why our responses to the movement have long been woefully inadequate.?
?Slate

Other Editions - Bring the War Home: The White Power Movement and Paramilitary America by Kathleen Belew 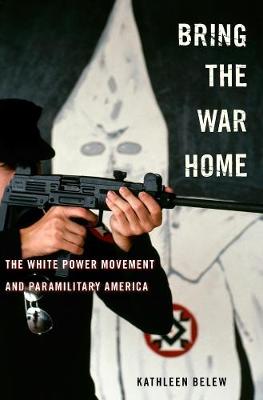 » Have you read this book? We'd like to know what you think about it - write a review about Bring the War Home: The White Power Movement and Paramilitary America book by Kathleen Belew and you'll earn 50c in Boomerang Bucks loyalty dollars (you must be a Boomerang Books Account Holder - it's free to sign up and there are great benefits!)


A Preview for this title is currently not available.
More Books By Kathleen Belew
View All