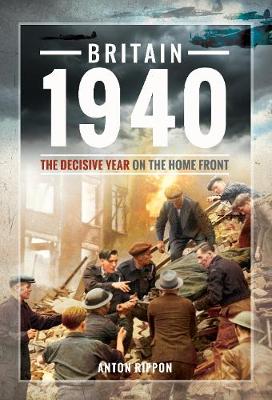 Britain 1940: The Decisive Year on the Home Front

Description - Britain 1940: The Decisive Year on the Home Front by Anton Rippon

ON New Year's Day 1940, the people of Britain looked back on the first four months of the Second World War with a sort of puzzled unease. Wartime life was nothing like what they had imagined. Unlike the First World War there was no fighting on the Western Front. Indeed, there was no Western Front. There had been no major air attacks. Four days into the war German bombers had approached the East Coast but no bombs were dropped. Everyone carried their gasmask but there was no poison gas. Petrol was the only commodity rationed. There was no noticeable shortage of food, which was as available now as it had been before Hitler invaded Poland. Young men called up to join the forces were largely idle. They certainly were not fighting the Germans. In January 1940, life in wartime Britain was simply an inconvenient version of life in peacetime. Even the hitherto strictly enforced blackout regulations were relaxed when it became obvious that, because of them, people were being killed in road accidents. On New Year's Eve 1940, Britain was deep in the throes of war. In September the Germans had launched what was to be an eight-month bombing campaign that targeted every one of Britain's major cities. By the end of 1940, German air raids had killed 15,000 British civilians. The so-called Phoney War had ended in May, when Hitler attacked the Low Countries. After Dunkirk, with the Luftwaffe poised just across the English Channel, and with the very real threat of invasion, the Second World War was now anything but phoney. AUTHOR: Anton Rippon is an award-winning newspaper columnist, journalist and author of over 30 books including Gas Masks for Goalposts: Football in Britain During the Second World War; Hitler's Olympics: The Story of the 1936 Nazi Games; and Gunther Pl schow: Airmen, Escaper and Explorer. Rippon was named Newspaper Columnist of the Year in the 2017 Midlands Media Awards. 32 b/w illustrations

Book Reviews - Britain 1940: The Decisive Year on the Home Front by Anton Rippon

» Have you read this book? We'd like to know what you think about it - write a review about Britain 1940: The Decisive Year on the Home Front book by Anton Rippon and you'll earn 50c in Boomerang Bucks loyalty dollars (you must be a Boomerang Books Account Holder - it's free to sign up and there are great benefits!)


A Preview for this title is currently not available.
More Books By Anton Rippon
View All