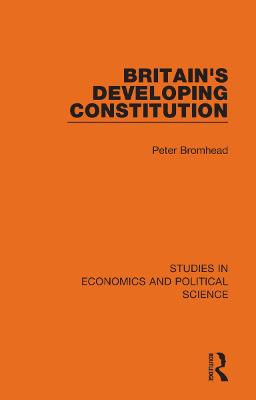 The 1970s era of rapid change, economic and social, made constant demands on the adaptability of a constitutional system. The work of the State expanded, and the expansion was at several levels, delimited by the requirements of geography.

Britain's constitutional system has two aspects: one essentially theoretical, concerning such questions as the nature of sovereignty, prerogative powers, and the rights and duties of citizens; the other concerning the way in which the business of government is carried on: how people who make political decisions are chosen, how their activities are subject to checks and influence by the representatives of public interests, formal and informal.

Originally published in 1974, this book deals with the second of these aspects. It identifies the changes in constitutional practice which had taken place in the previous two decades, and the trends which could be discerned at the time. It has four main sections. The first deals with the changing structure of government itself: with the recruitment of ministers, the nature of political responsibility and the changes in government departments. The second section deals with both Houses of Parliament, and particularly with the new forms of parliamentary discussion and criticism. The third deals with the process of election, including the regulation of propaganda and the use of the mass media. The final section deals with the different levels of government, including the local, the regional and the supra-national. All through the main concern is with the dynamic aspects of the political constitution. This was a really up-to-date and realistic book on British government at the time and now can be read in its historical context.

» Have you read this book? We'd like to know what you think about it - write a review about Britain's Developing Constitution book by Peter Bromhead and you'll earn 50c in Boomerang Bucks loyalty dollars (you must be a Boomerang Books Account Holder - it's free to sign up and there are great benefits!)


A Preview for this title is currently not available.
More Books By Peter Bromhead
View All