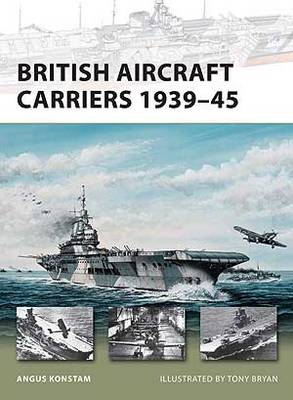 With war against Germany looming, Britain pushed forward its carrier program in the late 1930s. In 1938, the Royal Navy launched the HMS Ark Royal, its first-ever purpose-built aircraft carrier. This was quickly followed by others, including the highly-successful Illustrious class. Smaller and tougher than their American cousins, the British carriers were designed to fight in the tight confines of the North Sea and the Mediterranean. Over the next six years, these carriers battled the Axis powers in every theatre, attacking Italian naval bases, hunting the Bismark, and even joining the fight in the Pacific. This book tells the story of the small, but resilient, carriers and the crucial role they played in the British war effort.

» Have you read this book? We'd like to know what you think about it - write a review about British Aircraft Carriers 1939-45 book by Angus Konstam and you'll earn 50c in Boomerang Bucks loyalty dollars (you must be a Boomerang Books Account Holder - it's free to sign up and there are great benefits!)

Angus Konstam is an acclaimed military and naval historian, and one of Osprey's most experienced and respected authors, with over 35 titles in print. These Osprey titles include British Battlecruisers 1939-45, British Motor Torpedo Boats 1939-45, and the forthcoming two-volume study; British Battleships 1939-45, all of which form part of the New Vanguard list. Other titles include Spanish Armada 1588, Pirates, British Forts in the Age of Arthur and Piracy: The Complete History. He has also written over two dozen larger books for other publishers.A former naval officer, underwater archaeologist and maritime museum curator, Angus has a long and passionate love affair with the sea, maritime history and warships. He makes regular television and radio appearances, and has held events at the Edinburgh International Book Festival. Angus is now a full-time writer and historian, as well as being a board member of the Society of Authors, and Publishing Scotland. He currently lives in Edinburgh.For more details visit the author's website at www.anguskonstam.com The author lives in Edinburgh, Scotland.