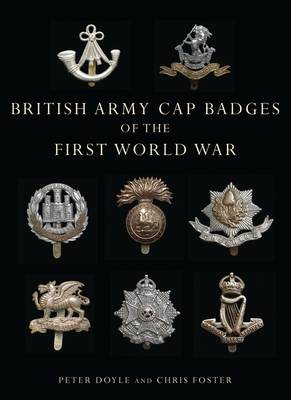 The fascination with the British involvement in the First World War extends to all aspects of the conflict. The battles and their outcomes; the armies and their leaders; the conditions of trench warfare; and the controversies form part of the growing literature examining every aspect of a war that was to cast a shadow over the rest of the twentieth century, the effects of which are still being felt today.

For the British army, the cap badge is the most easily identifiable form of insignia. It represents a distillation of the pride of the regiment, its various battle honors and symbols borne proudly on the metallic emblem that was worn on all headdress, even within the trenches. Identification of the cap badge on old photographs is a first, important step in unraveling the military service of an individual.

Cap badges have been collected avidly since they were first thought of in the nineteenth century. Cap-badge collecting is as popular now as it has ever been; yet with a growing number of fakes and forgeries, there is a need for a book that illustrates clearly the main types, and allows the collector and family historian alike to understand their meaning.

Surprisingly, there are no real comprehensive web-based resources; and the available books (many of which are out of print), are often dull, arcane and poorly illustrated with grey, muddy images of otherwise spectacular badges.

This book illustrates, for the first time in full color and high quality, images of the main types of badges used by the British Army in World War I. In addition, contemporary illustrations of the soldiers themselves wearing the badges, and the wider importance of their symbolism, is also included. Employing the skills of an established writer (and collector) and artist, it provides a unique reference guide for all people interested in the World War I.

» Have you read this book? We'd like to know what you think about it - write a review about British Army Cap Badges of the First World War book by Peter Doyle and you'll earn 50c in Boomerang Bucks loyalty dollars (you must be a Boomerang Books Account Holder - it's free to sign up and there are great benefits!)