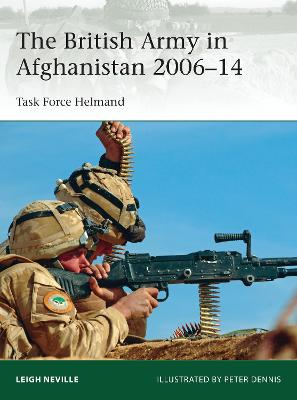 Description - The British Army in Afghanistan 2006-14 by Leigh Neville

Fighting an elusive and dangerous enemy far from home, the British army in Afghanistan has been involved in asymmetric warfare for the best part of a decade. The eight-year series of deployments jointly known as Operation Herrick, alongside US and other NATO contingents within the International Security Assistance Force (ISAF) in Afghanistan, have been the longest continuous combat commitment of the British Army since World War II. Together with Operation 'Telic' in Iraq, which immediately preceded and overlapped with it, this conflict has shaped the British Army for a generation. Enemy threats have diversified and evolved, with a consequent evolution of British doctrine, tactics and equipment. This book provides a detailed analysis of those specifics within a clear, connected account of the course of the war in Helmand, operation by operation.

» Have you read this book? We'd like to know what you think about it - write a review about British Army in Afghanistan 2006-14 book by Leigh Neville and you'll earn 50c in Boomerang Bucks loyalty dollars (you must be a Boomerang Books Account Holder - it's free to sign up and there are great benefits!)

Leigh Neville is an Australian national who has written a number of books on both modern conventional military units and special operations forces serving in Afghanistan and Iraq, their weapons and their vehicles including six titles for Osprey with several more in development. He has also consulted on military topics for several wargame companies and television documentary makers. He lives in Sydney with his wife and two dogs. He can be contacted via his website at www.leighneville.com. Peter Dennis was born in 1950. Inspired by contemporary magazines such as Look and Learn he studied illustration at Liverpool Art College. Peter has since contributed to hundreds of books, predominantly on historical subjects, including many Osprey titles.