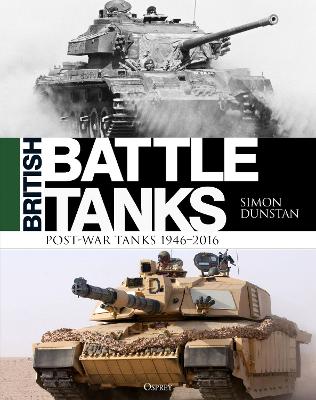 This book, the last in a four-part series on British Battle Tanks covering the whole history of British armoured warfare, concentrates on those vehicles that have served following the end of World War II up to the present day.

Starting with the Centurion, the title explores those types that equipped the armoured divisions lined up on the German plains to resist any potential Soviet offensive, as well as in Korea and Suez, including the Chieftain and Conqueror, and modern tanks such as the Challenger 2 which are still in service today. Covering the many variants of these and other tanks in British service as well as their deployments around the world, including in Afghanistan and Iraq, this illustrated volume is a comprehensive guide to the development of British tanks since the Second World War.

» Have you read this book? We'd like to know what you think about it - write a review about British Battle Tanks: Post-war Tanks 1946-2016 book by Simon Dunstan and you'll earn 50c in Boomerang Bucks loyalty dollars (you must be a Boomerang Books Account Holder - it's free to sign up and there are great benefits!)