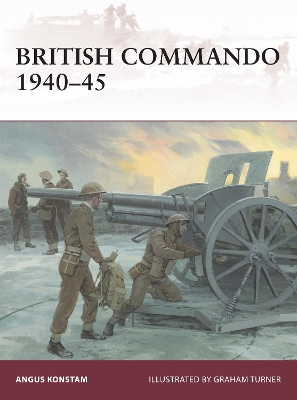 With Hitler's army rampaging across Europe, Winston Churchill ordered the creation of a special fighting force - the Commandos. These valiant men were volunteers drawn from the ranks of the British Army, formed into a Special Service Brigade and put through a rigorous but highly effective training programme. Over the course of World War II they would see action in every major theatre of operation and are credited with numerous feats of gallantry during the D-Day landings. Although many units were disbanded after the war, the Royal Marine Commandos have maintained the standards of this elite fighting formation to the present day.
Angus Konstam explores the history of the Commandos during their formative years, providing detailed descriptions of their training, weapons and equipment. Battle reports are accompanied by specially commissioned Osprey artwork and historical photographs, offering readers an in-depth analysis of some of the most famous fighting units in the British Army's history.

» Have you read this book? We'd like to know what you think about it - write a review about British Commando 1940-45 book by Angus Konstam and you'll earn 50c in Boomerang Bucks loyalty dollars (you must be a Boomerang Books Account Holder - it's free to sign up and there are great benefits!)

Angus Konstam hails from the Orkney Islands, and is the author of over 50 books, 30 of which are published by Osprey. This acclaimed and widely published author has written several books on piracy, including The History of Pirates, and Blackbeard: America's Most Notorious Pirate. A former naval officer and museum professional, he worked as the Curator of Weapons at the Tower of London and as the Chief Curator of the Mel Fisher Maritime Museum in Key West, Florida. He now works as a full-time author and historian, and lives in Edinburgh, Scotland. Graham Turner is a leading historical artist, specializing in the medieval period. He has illustrated numerous titles for Osprey, covering a wide variety of subjects from the dress of the 10th-century armies of the Caliphates, through the action of bloody medieval battles, to the daily life of the British Redcoat of the late 18th century. The son of the illustrator Michael Turner, Graham lives and works in Buckinghamshire, UK.