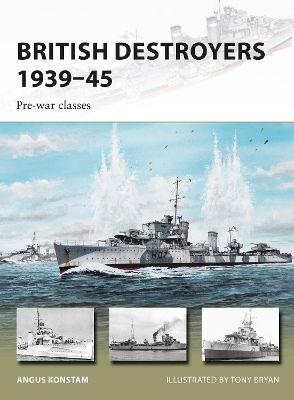 The Royal Navy entered World War II with a large but eclectic fleet of destroyers. Some of these were veterans of World War I, fit only for escort duties. Most though, had been built during the inter-war period, and were regarded as both reliable and versatile. Danger though lurked across the seas as new destroyers being built in Germany, Italy and Japan were larger and better armoured. So, until the new, larger Tribal-class destroyers could enter service, these vessels would have to hold the line. Used mainly to hunt submarines, protect convoys from aerial attack, and take out other destroyers, these ships served across the globe during the war. This fully illustrated study is the first in a two-part series on the real workhorses of the wartime Royal Navy, focusing on how these ageing ships took on the formidable navies of the Axis powers. 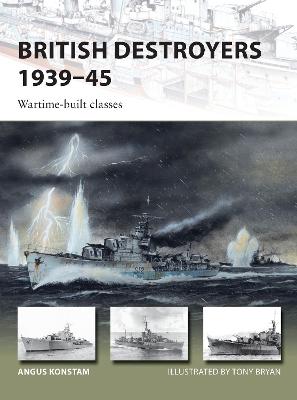 » Have you read this book? We'd like to know what you think about it - write a review about British Destroyers 1939-45 book by Angus Konstam and you'll earn 50c in Boomerang Bucks loyalty dollars (you must be a Boomerang Books Account Holder - it's free to sign up and there are great benefits!)

Angus Konstam hails from the Orkney Islands, and is the author of over 50 books, 30 of which are published by Osprey. This acclaimed and widely published author has written several books on piracy, including The History of Pirates, and Blackbeard: America's Most Notorious Pirate. A former naval officer and museum professional, he worked as the Curator of Weapons at the Tower of London and as the Chief Curator of the Mel Fisher Maritime Museum in Key West, Florida. He now works as a full-time author and historian, and lives in Edinburgh, Scotland. Paul Wright has painted ships of all kinds for most of his career, specializing in steel and steam warships from the late 19th century to the present day. Paul's art has illustrated the works of Patrick O'Brian, Dudley Pope and C.S. Forester amongst others, and hangs in many corporate and private collections all over the world. A Member of the Royal Society of Marine Artists, Paul lives and works in Surrey.