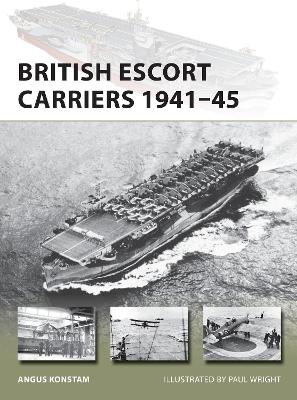 In 1941, as the Battle of the Atlantic raged and ship losses mounted, the British Admiralty desperately tried to find ways to defeat the U-Boat threat to Britain's maritime lifeline. Facing a shortage of traditional aircraft carriers and shore-based aircraft, the Royal Navy, as a stopgap measure, converted merchant ships into small 'escort carriers'. These were later joined by a growing number of American-built escort carriers, sent as part of the Lend-Lease agreement.

The typical Escort Carrier was small, slow and vulnerable, but it could carry about 18 aircraft, which gave the convoys a real chance to detect and sink dangerous U-Boats. Collectively, their contribution to an Allied victory was immense, particularly in the long and gruelling campaigns fought in the Atlantic and Arctic. Illustrated throughout with detailed full-colour artwork and contemporary photographs, this fascinating study explores in detail how these adaptable ships had such an enormous impact on the outcome of World War II's European Theatre.

» Have you read this book? We'd like to know what you think about it - write a review about British Escort Carriers 1941-45 book by Angus Konstam and you'll earn 50c in Boomerang Bucks loyalty dollars (you must be a Boomerang Books Account Holder - it's free to sign up and there are great benefits!)