This book explores the tensions underlying British imperialism in Cyprus. Much has been written about the British empire's construction outside Europe, yet there is little on the same themes in Britain's tiny empire in 'Europe'. This study follows Cyprus' progress from a perceived imperial asset to an expendable backwater by explaining how the Union Jack came to fly over the island and why after thirty-five years the British wanted it lowered. Cyprus' importance was always more imagined than real and was enmeshed within widely held cultural signifiers and myths. This book fills a gap in the existing literature on the early British period in Cyprus and challenges the received and monolithic view that British imperial policy was based primarily or exclusively on strategic-military considerations. The combination of archival research, cultural analysis and visual narrative that makes for an enjoyable read for academics and students of imperial, British and European history. -- .

Other Editions - British Imperialism in Cyprus, 1878-1915 by Andrekos Varnava 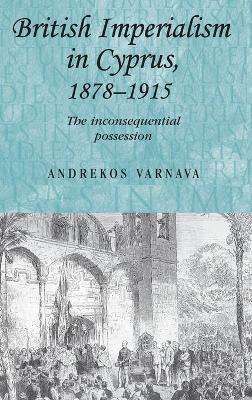 » Have you read this book? We'd like to know what you think about it - write a review about British Imperialism in Cyprus, 1878-1915 book by Andrekos Varnava and you'll earn 50c in Boomerang Bucks loyalty dollars (you must be a Boomerang Books Account Holder - it's free to sign up and there are great benefits!)

Andrekos Varnava is Lecturer in Modern History at Flinders University of South Australia -- .

A Preview for this title is currently not available.
More Books By Andrekos Varnava
View All

Serving the Empire in the Great War: The Cypriot Mule Corps, Imperial Loyalty and Silenced Memory
$40.49 $44.99