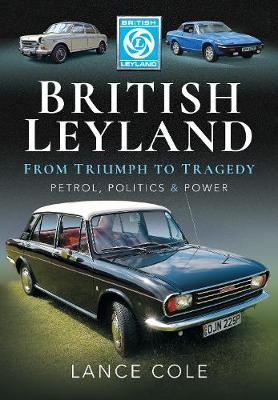 British Leyland: From Triumph to Tragedy. Petrol, Politics and Power

What really happened at British Leyland (BL)? Was it 'just' the cars, or were other factors vital to the story? Who really was to blame for BL and MG Rover's death? The 'truth' about BL is deeper than its cars were ultra- Left-wing plots to topple BL and British society real? Did secret deals and political intrigue really exist? Was it Labour or Conservative powers who 'killed' BL, or was it BL itself? How was it that BL's design genius was hobbled? Author Lance Cole lifts the bonnet on BL and presents a forensic yet easy to read new analysis in a story of BL, its cars, and the era of their motoring as powers on the political Left and Right waged war, sometimes even with themselves. Here is a book about cars and more, a conversation on all things BL: this is a new account of a classic British story told across a trail of evidence in a British industrial and political drama. Many mistakes made BL, but some of the cars were superb, the designs of genius, the engineering excellent; it is just that we have either forgotten, or been brainwashed into believing the worst. In a BL book like no other, written by a classic car fanatic with a background in industrial design, automotive, and wider journalism, this story lifts the lid on BL's cars and more. The author also adds inside knowledge from time working in the motor industry. Lance Cole tells the deeper BL story across the era of its greatest successes and its biggest failures. AUTHOR: Lance Cole is a journalist and the author of over a dozen books. He has written features and news items for many of the major automotive titles. He has been a columnist with the Daily Telegraph, The Independent and the South China Post. His books include Bugatti Blue, Vickers VC10, Secrets of the Spitfire, Saab Cars, and The Classic Car Adventure. Lance has worked in car design and he has restored several classic cars. He has off-road and 4x4 driving experience in Jeeps and Land Rovers in Africa and Australia. 50 colour and 50 b/w illustrations

» Have you read this book? We'd like to know what you think about it - write a review about British Leyland: From Triumph to Tragedy. Petrol, Politics and Power book by Lance Cole and you'll earn 50c in Boomerang Bucks loyalty dollars (you must be a Boomerang Books Account Holder - it's free to sign up and there are great benefits!)


A Preview for this title is currently not available.
More Books By Lance Cole
View All