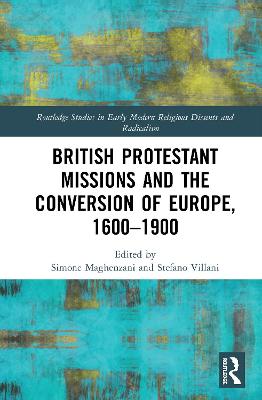 British Protestant Missions and the Conversion of Europe, 1600-1900

Description - British Protestant Missions and the Conversion of Europe, 1600-1900 by Simone Maghenzani

This book is the first account of British Protestant conversion initiatives directed towards continental Europe between 1600 and 1900.

Continental Europe was considered a missionary land-another periphery of the world, whose centre was imperial Britain. British missions to Europe were informed by religious experiments in America, Africa, and Asia, rendering these offensives against Europe a true form of "imaginary colonialism". British Protestant missionaries often understood themselves to be at the forefront of a civilising project directed at Catholics (and sometimes even at other Protestants). Their mission was further reinforced by Britain becoming a land of compassionate refuge for European dissenters and exiles. This book engages with the myth of International Protestantism, questioning its early origins and its narrative of transnational belonging, while also interrogating Britain as an imagined Protestant land of hope and glory.

In the history of western Christianities, "converting Europe" had a role that has not been adequately investigated. This is the story of the attempted, and ultimately failed, effort to convert a continent.

Book Reviews - British Protestant Missions and the Conversion of Europe, 1600-1900 by Simone Maghenzani

» Have you read this book? We'd like to know what you think about it - write a review about British Protestant Missions and the Conversion of Europe, 1600-1900 book by Simone Maghenzani and you'll earn 50c in Boomerang Bucks loyalty dollars (you must be a Boomerang Books Account Holder - it's free to sign up and there are great benefits!)