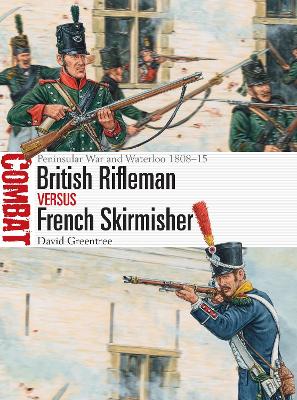 The battles between British and French forces during the Peninsular War (1807-14) and the Hundred Days campaign of 1815 saw both sides deploy specialist units of skirmishers trained in marksmanship and open-order combat. These 'light' troops fulfilled several important roles on the battlefield, such as 'masking' large bodies of close-order troops as they manoeuvred in battle, firing upon enemy troops to provoke them into attacking prematurely, and harassing enemy artillery crews and senior officers with aimed fire. On occasion, the skirmishers were tasked with special missions requiring individual initiative, such as the capture or defence of key battlefield positions, especially those situated in difficult terrain.

While Napoleon's skirmishers carried the smoothbore musket, notoriously inaccurate and short-ranged, several elite units fighting for Britain were armed with the rifle, a far more accurate weapon that was hampered by a slower rate of fire. As well as the legendary 95th Rifles, Britain fielded rifle-armed German troops of the 60th Regiment and the King's German Legion, while France's light troops were fielded in individual companies but also entire regiments. In this study, David Greentree assesses the role and effectiveness of rifle-armed British troops and their French open-order opponents in three very different encounters: Rolica (August 1808), the first British battle of the Peninsular War; the struggle for a key bridge at Barba del Puerco (March 1810); and the bitter fight for the La Haye Sainte farmhouse during the battle of Waterloo (June 1815).

» Have you read this book? We'd like to know what you think about it - write a review about British Rifleman vs French Skirmisher: Peninsular War and Waterloo 1808-15 book by David Greentree and you'll earn 50c in Boomerang Bucks loyalty dollars (you must be a Boomerang Books Account Holder - it's free to sign up and there are great benefits!)


A Preview for this title is currently not available.
More Books By David Greentree
View All