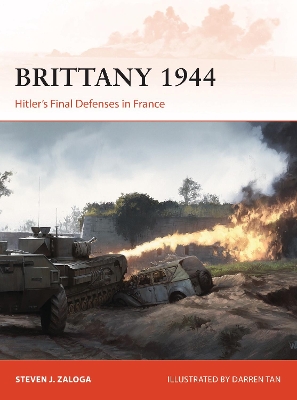 One of the prime objectives for the Allies following the D-Day landings was the capture of sufficient ports to supply their armies. The original Overlord plans assumed that ports along the Breton coast would be essential to expansion of the Normandy beach-head. This included the major ports at Brest and on Quiberon Bay.

The newly arrived Third US Army (TUSA) under Lt. Gen. George S. Patton was delegated to take on the Brittany mission. In one of the most rapid mechanized advances of the war, TUSA had the ports of Avranches and Quiberon encircled by the second week of August 1944.

But changing priorities meant that most of TUSA was redeployed, meaning only a single corps was left to take the Breton port cities. The fight would drag into 1945, long after German field armies had been driven from France. Using full colour maps and artwork as well as contemporary accounts and photographs, Brittany 1944 is the fascinating story of the siege of Germany's last bastions on the French Atlantic coast.

» Have you read this book? We'd like to know what you think about it - write a review about Brittany 1944 book by Steven J. Zaloga and you'll earn 50c in Boomerang Bucks loyalty dollars (you must be a Boomerang Books Account Holder - it's free to sign up and there are great benefits!)

Steven J. Zaloga received his BA in History from Union College and his MA from Columbia University. He has worked as an analyst in the aerospace industry for over two decades, covering missile systems and the international arms trade, and has served with the Institute for Defense Analyses, a federal think tank. He is the author of numerous books on military technology and military history, with an accent on the US Army in World War II as well as Russia and the former Soviet Union. Born and raised in Malaysia, Darren Tan grew up drawing spaceships, dinosaurs and the stuff of his imagination, which was fuelled by movies and computer games. Following a brief stint in 3D animation, Darren now works as a freelance illustrator.