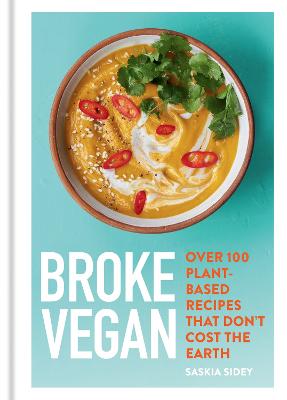 Broke Vegan: Over 100 plant-based recipes that don't cost the earth

As seen on TV'There's something for everyone here... Brilliant recipes... A really clever book' - Georgina Hayden, Sunday Brunch We all want to help do our bit to save the planet by moving towards a plant-based diet, but let's face it: eating vegan can be expensive.With over 100 plant-based recipes using supermarket staples along with hints and tips for making your food go further, Broke Vegan will have you cooking meals time after time that save money and save the planet. From easy weeknight meals ready in 20 minutes to feeding a crowd on a budget or saving bags of time and money by batch cooking, Broke Vegan has got you covered.Whether you're taking part in Veganuary for the first time, making the move from veggie to vegan or just trying to make your money go further, Broke Vegan will bring variety and flavour to your meals without having to spend a fortune.BREAKFAST & BRUNCH including:Speedy sourdoughAny berry muffinsFrozen smoothie bowlBATCH COOKING including:Confit tomatoesChilli con veggieSticky sweet auberginesREADY IN 20 including:Kimchi pancakes with dipping sauceCauliflower nuggetsBack of the fridge frittersIMPRESS A CROWD including:Pizza 5 waysAny vegetable tartSOMETHING SWEET including: Chocolate mousse Lemon, coconut & cardamom cakeLeftover porridge flapjacks

» Have you read this book? We'd like to know what you think about it - write a review about Broke Vegan: Over 100 plant-based recipes that don't cost the earth book by Saskia Sidey and you'll earn 50c in Boomerang Bucks loyalty dollars (you must be a Boomerang Books Account Holder - it's free to sign up and there are great benefits!)


A Preview for this title is currently not available.
More Books By Saskia Sidey
View All