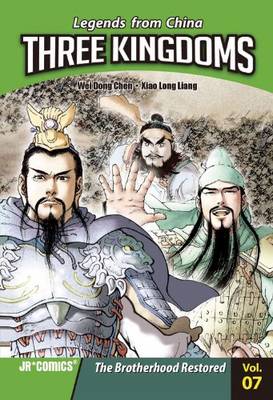 When Liu Bei, Guan Yu and Zhang Fei are finally reunited after the disastrous battle against Cao Cao left them separated, they recommit themselves to the blood oath they swore to restore their homeland. But upholding the oath will not be easy. Cao Cao still controls much of the nation, and a new power is emerging in the east. Battle lines will be drawn, and more than one brotherhood will be tested. Acclaimed as one of the Four Great Novel of the Chinese Literature, The Romance of the Three Kingdoms is a classic of Eastern storytelling, whose influence is as widespread and lasting as Shakespeare's. AUTHOR: Wei Dong Chen, a highly acclaimed and beloved artist, and an influential leader in the "New Chinese Cartoon" trend, is the founder of Creator World in Tianjin, the largest comics studio in China, Recently the Chinese government entrusted him with the role of general manager of the Beijing Book Fair, and his reputation as a pillar of Chinese comics has brought him many students. He has published more than three hundred cartoons, which have been recognised for their strong literacy value not only in Korea, but in Europe and Japan, as well. Free spirited and energetic, Wei Dong Chen's positivist philosophy is reflected in the wisdom of his work. He is published serially in numerous publications while continuing to conceive projects that explore new dimensions of the form. Xiao Long Liang is considered one of Wei Dong Chen's greatest students. One of the most highly regarded cartoonists in China today. Xiao Long's fantastic techniques and expression of Chinese culture have won him the acclaim of cartoon lovers throughout China. His other works include "Outlaws of the Marsh" and w003 "A Story on the Motorbike". ILLUSTRATIONS: Colour

» Have you read this book? We'd like to know what you think about it - write a review about Brotherhood Restored book by Wei Dong Chen and you'll earn 50c in Boomerang Bucks loyalty dollars (you must be a Boomerang Books Account Holder - it's free to sign up and there are great benefits!)