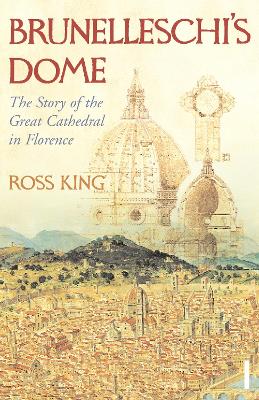 The Story of the Great Cathedral in Florence

Even in an age of soaring skyscrapers and cavernous sports stadiums, the cathedral of Santa Maria del Fiore in Florence, with its immense, terracotta-tiled cupola, still retains a rare power to astonish. Yet the elegance of the building belies the tremendous labour, technical ingenuity and bitter personal strife involved in its creation. For over a century after work on the cathedral began in 1296, the proposed dome was regarded as all but impossible to build because of its enormous size. The greatest architectural puzzle of its age, when finally completed in 1436 the dome was hailed as one of the great wonders of the world. To this day, it remains the highest and widest masonry dome ever built. This book tells the extraordinary story of how the cupola was raised, from its conception to its consecration. Also told is the story of the dome's architect, the brilliant and volatile Filippo Brunelleschi. Denounced as a madman at the start of his labours, he was celebrated at their end as a great genius. His life was one of ambition, ingenuity, rivalry and intrigue - a human drama set against the plagues, wars, political feuds and intellectual ferments of Renaissance Florence, the glorious era for which the dome remains the most compelling symbol.

» Have you read this book? We'd like to know what you think about it - write a review about Brunelleschi's Dome book by Dr Ross King and you'll earn 50c in Boomerang Bucks loyalty dollars (you must be a Boomerang Books Account Holder - it's free to sign up and there are great benefits!)

Ross King is the author of two novels and the highly praised Michelangelo and the Pope's Ceiling. He lives near Oxford.

A Preview for this title is currently not available.
More Books By Dr Ross King
View All