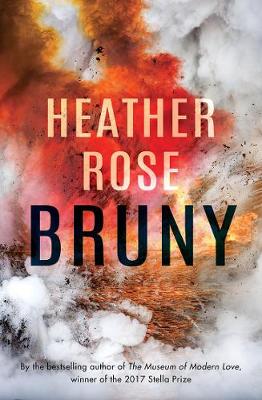 Why is a massive bridge being built to connect the sleepy island of Bruny with the mainland of Tasmania? And why have terrorists blown it up?

When the Bruny bridge is bombed, UN troubleshooter Astrid Coleman agrees to return home to help her brother before an upcoming election. But this is no simple task. Her brother and sister are on either side of politics, the community is full of conspiracy theories, her mother is fading and her father is quoting Shakespeare. Only on Bruny does the world seem sane. Until Astrid discovers how far the government is willing to go.

Bruny is a searing, subversive novel about family, love, loyalty and the new world order. It is a gripping thriller with a jaw-dropping twist, a love story, a cry from the heart and a fiercely entertaining and crucial work of imagination that asks the burning question: what would you do to protect the place you love?

Praise for The Museum of Modern Love:

'A glorious novel, meditative and special in a way that defies easy articulation.' Hannah Kent, author of Burial Rites

'I adored it, and it is my book of the year so far.' Amanda Rayner, Readings Reviews

'Captivating ... a gem of a novel.' Library Journal, starred review

'With rare subtlety and humanity, this novel relocates the difficult path to wonder in us all.' The Christina Stead Prize 2017

'An unusual and lively work of fiction.' Newsday

Other Editions - Bruny by Heather Rose 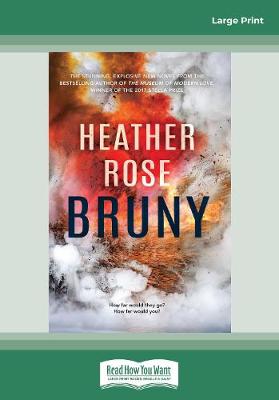 » Have you read this book? We'd like to know what you think about it - write a review about Bruny book by Heather Rose and you'll earn 50c in Boomerang Bucks loyalty dollars (you must be a Boomerang Books Account Holder - it's free to sign up and there are great benefits!)

5 stars Bruny is the eighth novel by award-winning Australian author, Heather Rose. It is November 2021 when the north tower of the almost-completed Bruny Bridge is bombed. Already four years under construction, the two-billion-dollar bridge was due for completion in early 2022 and has been the subject of much dissent throughout the state of Tasmania. Protestors are camped at each end of the bridge but vehemently deny any involvement with the destruction.

Tasmania’s Liberal Premier, John Coleman (JC) needs it to open in early March to ensure a win in the State Election on March 5th, and only an influx of foreign workers will see this deadline met. Foreign worker legislation is hastily passed, and JC brings in his twin sister, Astrid, a Conflict Resolution Consultant for the UN, to ensure the smooth completion.

Despite her Party having greenlighted the construction, Labour Opposition Leader, Maxine Coleman (JC’s older sister) has misgivings about the whole project. Apart from the Chinese funding (commercial in confidence, so unexplained), the Chinese steel and the Chinese workers, the scale of the project bothers Max: to spend two billion dollars on a bridge to nowhere when the state’s schools and hospitals are desperate for funding? Something is fishy about the whole thing and Max shares her concerns with her little sister.

After avoiding her birthplace for some thirty years, Astrid Coleman (Ace) returns to Tasmania reluctantly, though not because of her brother’s duty call. But it does provide an opportunity to catch up with her siblings, her nieces and her beloved, now demented, father, ex-Labour MP, Angus Coleman. Her dying mother is less a draw than an obligation.

While her family may help draw her back and her house on Bruny Island tempts her to stay, it will be the claustrophobia and lack of privacy that Tasmania imposes, as well as her New York-based children that will likely spur her eventual departure.

Ace talks to the many and varied interest groups including the works management, the political parties, the most vocal protestors, and the Chinese investors, and reports back to JC. She’s in a good position to perhaps discover who has tried to sabotage the construction and this, too, is reported, though not to her brother. Is China trying to take over by stealth instead of force?

In the build up to an election that will be fought on jobs and growth (Liberal) versus education and health (Labour), Ace has brokered a fragile truce between protestors and workers. But when some extremely disturbing information falls into her hands, Ace understands her loyalties will be tested.

Rose presents the pros and cons of such a development through the thoughts, feelings and opinions of various characters, acknowledging that, with an issue like this, there is no black or white, only shades of grey. Her characters are multi-faceted and credible, and Angus Coleman’s Shakespeare quotes are a delight: often very much to the point and, occasionally, quite incisive.

The maps Rose includes will be much appreciated by readers, even those familiar with the area. This novel is topical and relevant, presenting scenarios that are just a whisker from today’s world and, therefore, scarily believable. An utterly fascinating and thought-provoking read. This unbiased review is from an uncorrected proof copy provided by Allen & Unwin.

Perimenopause: How to Create A Healthy Physical & Emotional Life During the Change
$27.40 $30.44