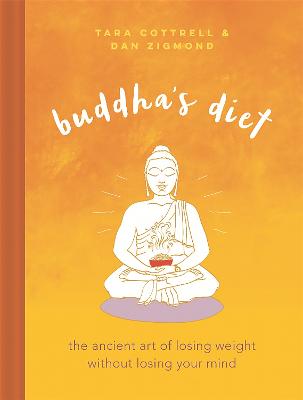 The Ancient Art of Losing Weight Without Losing Your Mind

There's a lot you probably don't know about the Buddha. For one, the real Buddha was thin. And before he became the Enlightened One," he was a pampered prince named Siddhartha. He tried dieting once and didn't like it any more than you do. Instead, he sought a middle way" between unhealthy overindulgence and unrealistic abstinence. The instructions he gave his monks about eating, more than 2,500 years ago, were surprisingly simple.Fast forward to today, and modern science confirms what Buddha knew all along. It's not what you eat that's important, but when you eat. You don't need to follow the latest fads or give up your favourite foods. You just have to remember a few guidelines that Buddha provided,guidelines that, believe it or not, will help you lose weight, feel better, and stop obsessing about food. Sure, Buddha lived before the age of doughnuts and French fries, but his wisdom and teachings endure, providing us with a sane, mindful approach to achieving optimum health.

» Have you read this book? We'd like to know what you think about it - write a review about Buddha's Diet book by Dan Zigmond and you'll earn 50c in Boomerang Bucks loyalty dollars (you must be a Boomerang Books Account Holder - it's free to sign up and there are great benefits!)

TARA COTTRELL is a writer, digital strategist, and mom. She consults and writes for lifestyle and wellness brands in Silicon Valley and is a well-being advocate for at-risk and foster youth. She is currently the web content manager at Stanford University's Graduate School of Business. When she's not working, writing, or parenting, she's shoe shopping. She lives in Menlo Park, CA.DAN ZIGMOND is a writer, data scientist, and Zen priest. He advises startups and venture capital firms about data and health. He is a contributing editor at Tricycle, the largest Buddhist magazine in North America, and teaches at Jikoji Zen centre, a small Buddhist temple in the Santa Cruz mountains. In May 2015, he was named one of 20 Business Geniuses You Need to Know" by Wired Magazine, as he frequently reminds his kids. He lives in Menlo Park, too.

A Preview for this title is currently not available.
More Books By Dan Zigmond
View All