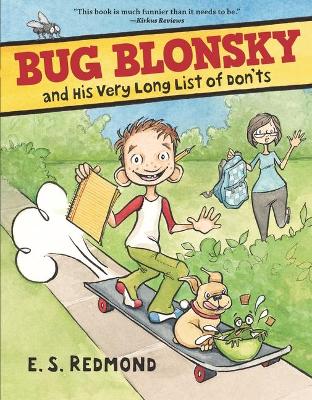 Bug Blonsky and His Very Long List of Don'ts

Description - Bug Blonsky and His Very Long List of Don'ts by E.S. Redmond

Follow one rip-roarious day in the life of an antsy (if lovable) boy named Bug, guided by E. S. Redmond's humor and wit.

If seven-year-old Benjamin (aka Bug) Blonsky were a superhero, he'd be "Bug Boy with the Power to Annoy." That's what his big sister says. Mom says he's wiggly and can't sit still. Dad says he's easily distracted. On this day, Bug's "choices" - drawing pictures of pig roller coasters during math time, making armpit noises when his teacher bends over - have landed him in a heap of trouble, so now he's writing a list of what not to do: his list of don'ts. Such as: don't be late for the bus (you'll have to sit with know-it-all Abner), don't trade a cookie for a flaxseed muffin (it won't taste like cotton candy), don't be nice to Peggy Pinkerton (she'll want to kiss you), and whatever happens, don't tell Mom! Bug's list is very long, but will it help him stay out of trouble? Don't count on it!

Other Editions - Bug Blonsky and His Very Long List of Don'ts by E.S. Redmond » Have you read this book? We'd like to know what you think about it - write a review about Bug Blonsky and His Very Long List of Don'ts book by E.S. Redmond and you'll earn 50c in Boomerang Bucks loyalty dollars (you must be a Boomerang Books Account Holder - it's free to sign up and there are great benefits!)


A Preview for this title is currently not available.
More Books By E.S. Redmond
View All