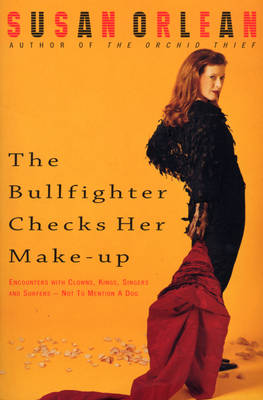 The Bullfighter Checks Her Make-Up

Description - The Bullfighter Checks Her Make-Up by Susan Orlean

A hilarious and sparkling collection of essays on people, famous, infamous and obscure, told with the gloriously eccentric wit that have made Susan Orlean one of America's best-known journalists and The Orchid Thief into a bestseller.

Susan Orlean's collection of profiles ranges from the well-known (Marky Mark) to the unknown (Colin Duffy, a typical American man, aged ten) to the formerly known (the cult sixties girl group the Shaggs). Orlean meets with Cristina Sanchez, Spain's first fully-qualified female matador, Silly Billy, New York's most successful children's clown, an African king who is a New York taxi-driver, and a champion show dog called Biff, who from a certain angle looks like President Clinton. As in her remarkable bestseller The Orchid Thief, soon to be the basis of Spike Being John Malkovich Jonze's new film, starring Meryl Streep and Nicholas Cage, Orlean's eye for the fascinatingly bizarre and her wonderfully witty way with language make her take on the world utterly original and unique.

Book Reviews - The Bullfighter Checks Her Make-Up by Susan Orlean

» Have you read this book? We'd like to know what you think about it - write a review about Bullfighter Checks Her Make-Up book by Susan Orlean and you'll earn 50c in Boomerang Bucks loyalty dollars (you must be a Boomerang Books Account Holder - it's free to sign up and there are great benefits!)

Susan Orlean has been a staff writer for the New Yorker since 1992 and has also written for Esquire, Vogue and Rolling Stone. She is the author of five books including the international bestseller The Orchid Thief, the inspiration for the film Adaptation directed by Spike Jonze and starring Nicholas Cage and Meryl Streep. Susan Orlean lives in Boston.

A Preview for this title is currently not available.
More Books By Susan Orlean
View All