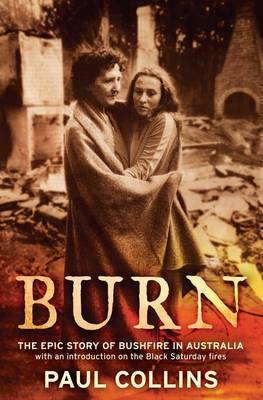 Burn: The Epic Story of Bushfire in Australia: with an introduction on the Black Saturday fires

Description - Burn: The Epic Story of Bushfire in Australia: with an introduction on the Black Saturday fires by Paul Collins

'Dry heat and hot, dry winds worked upon a land already dry, to suck from it the last, least drop of moisture. Men who had lived their lives in the bush went their ways in the shadow of dread expectancy. But though they felt the imminence of danger they could not tell that it was to be far greater than they could imagine. They had not lived long enough.' - Report of the Royal Commission into the bushfires of January 1939

With the start of every bushfire season and the first threatening hints of burning eucalypt in the air, we are reminded, no matter where we live, that bushfire is an inescapable reality in this country. In Burn Paul Collins tells the epic story of bushfire in Australia, drawing on accounts of the most devastating conflagrations in Australia's European history - from the 1851 Black Thursday fire (which burnt out one quarter of Victoria) to the 1939 Black Friday fires (which took many lives and destroyed thousands of hectares in Victoria, New South Wales, South Australia, and Tasmania), the Canberra inferno of 2003, and the Black Saturday fires of February 2009.

Frightening, compelling, vivid, and provocative, Burn reveals stories of heroism, stupidity, political incompetence, and environmental vandalism. This is the grand narrative of bushfire in Australia, the most fire-prone land on Earth.

'Drawing especially on newspaper accounts, Collins offers a vivid narrative of bushfires in which he focuses on the human dimension of the drama ... The author is determined that the awesome force of nature that is fire should not overwhelm the particularities of human suffering and survival ... The writing is clear and compelling, and the relentless cascade of human drama in the face of fire confronts one with its ubiquity and power.'
-Tom Griffiths, Australian Book Review

Buy Burn: The Epic Story of Bushfire in Australia: with an introduction on the Black Saturday fires by Paul Collins from Australia's Online Independent Bookstore, Boomerang Books.

Book Reviews - Burn: The Epic Story of Bushfire in Australia: with an introduction on the Black Saturday fires by Paul Collins

» Have you read this book? We'd like to know what you think about it - write a review about Burn: The Epic Story of Bushfire in Australia: with an introduction on the Black Saturday fires book by Paul Collins and you'll earn 50c in Boomerang Bucks loyalty dollars (you must be a Boomerang Books Account Holder - it's free to sign up and there are great benefits!)

A Preview for this title is currently not available.
More Books By Paul Collins
View All