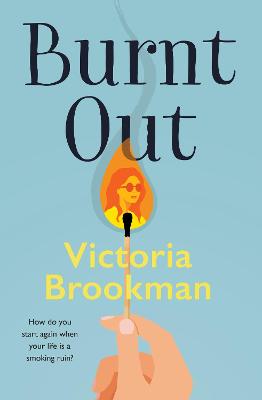 37 days to go! Scheduled for release on 5 Jan 2022.
Pre-order now to be one of the first to receive this book!

Description - Burnt Out by Victoria Brookman

How do you start again when your life is a smoking ruin?

She lost everything in a bushfire and became the celebrity face of climate change. But is fame and living with a billionaire all it's cracked up to be? A warm and witty story for our times.

Calida Lyons is having a very bad week. She's long past deadline for her still unwritten second novel; her husband has just left her; and her Blue Mountains community is being threatened by bushfires. Just as she hits rock bottom, she's forced to shelter with neighbours while a fire incinerates everything she owns.

Devastated and emotional in front of news cameras, Cali delivers a blistering, unfiltered rebuke to the nation's rich to do something.

Her rant goes viral, and she quickly becomes the latest celebrity face of the climate movement. Soon she's offered a harbourside refuge by handsome tech billionaire Arlo Richard, her publisher is delighted with the new novel she's writing, and she's the darling of high society.

But things aren't as they seem. It's all built on lies, and Cali's pretty sure that the precarious house of cards she's built is about to come tumbling down.

» Have you read this book? We'd like to know what you think about it - write a review about Burnt Out book by Victoria Brookman and you'll earn 50c in Boomerang Bucks loyalty dollars (you must be a Boomerang Books Account Holder - it's free to sign up and there are great benefits!)