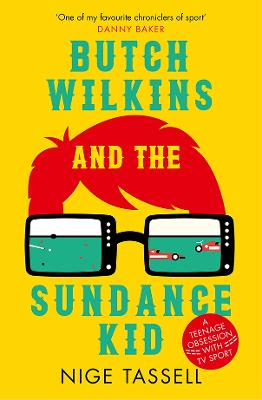 Butch Wilkins and the Sundance Kid

A Teenage Obsession with TV Sport

Description - Butch Wilkins and the Sundance Kid by Nige Tassell

It is memoir intertwined with nostalgia, ruminations on the changing face of sport during this time, portraits of its heroes and villains, and reflections on teenagehood and impending adulthood.

Sweet, wise and witty, Butch Wilkins and the Sundance Kid is a hymn to televised sport in the 1980s - as well as to the decade itself - combining humour, insight and poignancy to vividly depict the way sport can transcend the television screen to impact on wider life, hopes and ambitions.

» Have you read this book? We'd like to know what you think about it - write a review about Butch Wilkins and the Sundance Kid book by Nige Tassell and you'll earn 50c in Boomerang Bucks loyalty dollars (you must be a Boomerang Books Account Holder - it's free to sign up and there are great benefits!)

Nige Tassell has been a journalist for more than twenty years. He has written extensively about sport for a range of titles, including FourFourTwo, The Guardian, 220 Triathlon, The Word and BBC History. He was the editor and writer of World in Motion, chronicling the history of the England team at the World Cup, and is the author of Three Weeks, Eight Seconds: The Epic Tour de France of 1989 published in 2017 by Polaris Publishing Ltd and The Bottom Corner: A Season with the Dreamers of Non-League Football published in 2016 by Yellow Jersey.

A Preview for this title is currently not available.
More Books By Nige Tassell
View All

Boot Sale: Inside the Strange and Secret World of Football's Transfer Window
$23.67 $26.30