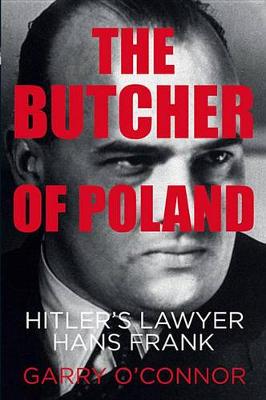 The Butcher of Poland

Description - The Butcher of Poland by Garry O'Connor

The life of the Bavarian Hans Frank, one of the ten war criminals hanged at Nuremburg in 1946, who converted to Catholicism before he died, has not received the full attention the world has given to other Nazi leaders. In many ways he warrants it more. His life symbolises Germany's hubristic and visionary ambition to an alarming degree much better than anyone else's, perhaps because he was an intellectual of the highest calibre: `Can't they see,' he said of his fellow accused at Nuremberg, `that this is a horrible tragedy in the history of mankind, and that we are the symbols of an evil that God is brushing aside?' As he recognised by the end he was a primary - if not the exemplary - symbol of evil, his remorse, self-pity, and arrogance knew no bounds as they vied with his contrition.

Author Garry O'Connor brings his skills as a playwright, biographer and novelist to this harrowing account of Histler's lawyer, the man who formalised the Nazi race laws.

Book Reviews - The Butcher of Poland by Garry O'Connor

» Have you read this book? We'd like to know what you think about it - write a review about Butcher of Poland book by Garry O'Connor and you'll earn 50c in Boomerang Bucks loyalty dollars (you must be a Boomerang Books Account Holder - it's free to sign up and there are great benefits!)

Garry O'Connor is a theater director and the author of more than a dozen books including "Universal Father: A Life of Pope John Paul II." Michael Holroyd is the author of "A Book of Secrets."

A Preview for this title is currently not available.
More Books By Garry O'Connor
View All